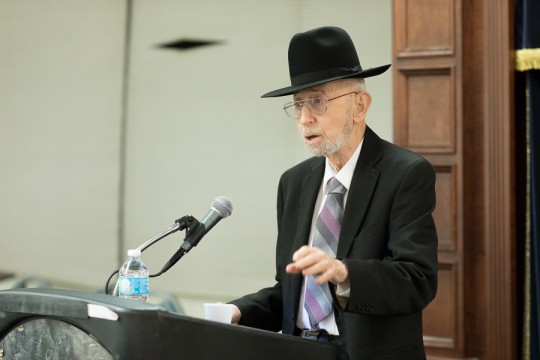 On Wednesday, November 9, close to 100 students, faculty and members of the community filled the Rubin Shul on Yeshiva University’s Wilf Campus to hear from Rabbi Dr. Manfred Fulda, associate professor of Talmud, about his experiences as a young boy growing up during the Holocaust.

The event marked the 78th anniversary of Kristallnacht, a pogrom against Jews in Nazi Germany which occurred on November 9 and 10, 1938. The name “Kristallnacht” is German for “night of broken glass,” referring to the smashed windows of Jewish-owned stores, buildings, and synagogues.

While Rabbi Fulda did not speak directly about that night because, as he said, “I am not comfortable commemorating that date,” he shared stories and ideas connected to the event. He noted that Kristallnacht began with Adolph Hitler’s rise to power in 1933, which legitimized the anti-Semitic feelings of many in German society. But, as he pointed out, not everyone harbored those feelings. He told the story of his neighbor, a member of the Hitler Youth, who did what he could to deflect the Schutzstaffel, or the S.S., when they made their periodic sweeps through the neighborhood to extract the Jews. 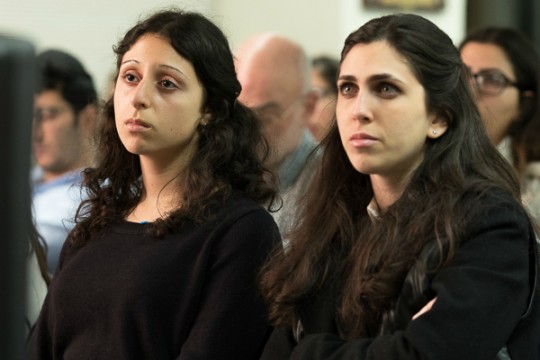 His beloved father, about whom he spoke with deep esteem, had almost been able to get them out of what his father called “this cursed country.” He took the family of six by train from Frankfurt to Kehl, the last German community before the border with France. From there, they tromped through the woods towards Strasbourg, hoping to skirt the border patrol because they had no visas. But the French gendarmes captured them and deported them back to Frankfurt.

Rabbi Fulda related how, under his father’s command, he hid in the attic the family’s precious Sefer Torah, purchased at great price years before by his father, so that it would not be found by the Nazis as they rampaged through the city.  He spoke with deep feeling about how his father shielded the body of a stranger from the blows of the Nazis’ whips as the Jews were herded to the cattle cars, refusing to accept the man’s thanks because protecting him “was what a Jew should do for a Jew.” 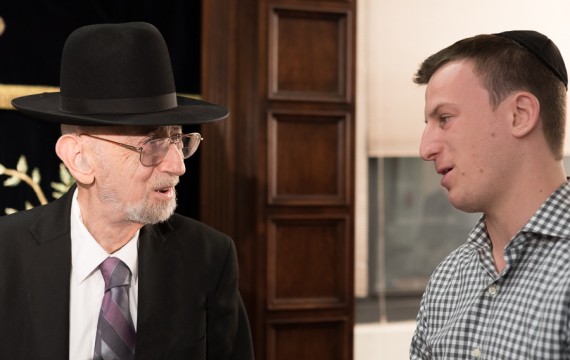 What he has learned in his life, Rabbi Fulda said, after passing through the inferno of the Holocaust and spending a rich academic career at YU, is that it is the “little acts of kindness matter the most.”

“Our purpose in life, the purpose of the yeshiva, is to learn how to do everything required by a Jew and not be arrogant about it,” Rabbi Fulda said.

The talk was organized by the Student Holocaust Education Movement and the YU Family Discovery Club.