When Riva Tropp first enrolled at Stern College for Women, she already knew her passion for creative writing would make her a natural English major. She enrolled in an introductory computer science class, taught by Professor Alan Broder, to fulfill a requirement, and because she was curious. That’s when everything started to change.

“I loved it so much that I signed up for another class—and another one after that,” she said. “Computer science is a wonderful major and a great field. People think it’s all about computers, but it’s really about learning languages, learning logic, and using those to do whatever you want. Even if you major in something else, it’s worthwhile to know a little.” 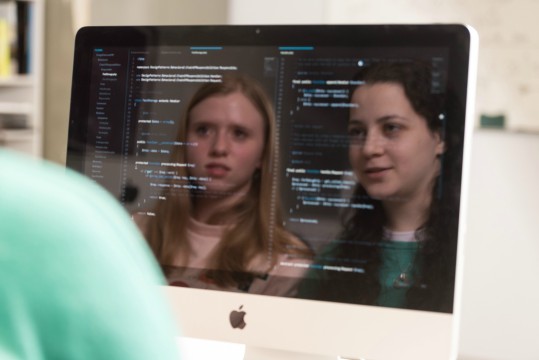 At Stern, the computer science major is stronger than ever, according to Broder, who chairs the department. With expanded course offerings, record enrollment, and budding extracurricular programs, it’s a booming area of interest for students. “They are also hearing great stories from their friends who have gotten robust attention and job offers even just with a minor, because the job market for computer science is so strong and women have typically been underrepresented,” said Broder.

That’s certainly been true for Tropp, who graduated this winter with a dual degree in computer science and creative writing. She’s currently taking advanced classes at Columbia University towards her master’s degree in the field and will begin Google’s Engineering Residency Program in July, where she’ll receive training and rotate between two teams.

“The teachers at Stern are great—Professor Broder’s Data Structures and Algorithms class was really comprehensive and is helping me in my classes at Columbia as well,” said Tropp. “Linux Programming for Data Analysis was also amazing; not many universities teach those skills, but they’re invaluable in a programming environment. The teachers know you and are genuinely invested in your success, which is hard to find anywhere.”

The major has also been bolstered by the addition of new faculty member Rabbi Dr. Joshua Waxman ’98YUHS, ’00YC, ’06R—although for Waxman, an alum of many YU schools, his return to the University is practically a homecoming. The son of a professor of computer science himself, Waxman fell in love with programming early, coding computer games in the languages Pascal and C by the time he was 10.

Since graduating from Yeshiva College with a degree in computer science (as well as obtaining ordination from YU’s Rabbi Isaac Elchanan Theological Seminary and his doctorate in computer science from the Graduate Center of the City University of New York), Waxman has garnered a wide range of experience in the programming world, working on everything from device drivers for military and commercial airplane network simulators in Israel to developing bespoke systems for private businesses. Most recently, he was part of a rapid solutions team at UBS, quickly writing software to meet the needs of risk managers and traders.

This semester, Waxman will be teaching Object Oriented Software Design, a programming course that will study Java and various design patterns, and Programming Languages, which focuses on several programming languages, their features and their implementations, including a few useful modern languages, such as R, Scala, Go and VBA.

“I’m a big believer in Torah Umaddah,” said Waxman. “Yeshiva University is my alma mater a few times over, and the academic environment for teaching and research at Stern seems perfect. I believe that we can leverage Computational Linguistics to analyze and gain deeper insights into Torah texts; this is an application of Torah Umaddah I would like to explore while at Stern.”

In addition to new faculty expertise, the program is also attracting exceptional students with a passion for computer science, thanks to the introduction of the Thomas Otway Memorial Scholarship. The scholarship was established in the memory of Dr. Thomas Otway, who led the mathematics department and taught at YU for more than 25 years, and is awarded to top-tier students seeking to pursue careers in computer science. 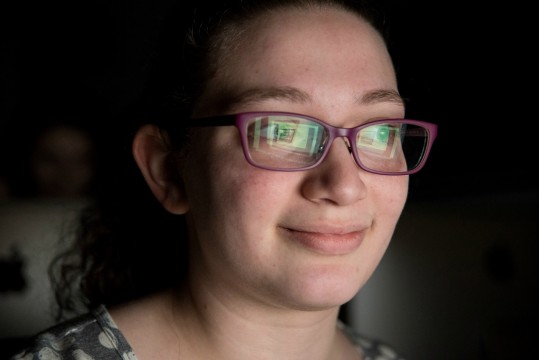 Hannah Dubin, a senior, decided to major in computer science after discovering that the field played to her strengths in the intro class she took in her third semester on campus. “I took Data Structures and a Database class the next semester, pretty much guaranteeing I’d major in computer science,” said Dubin. “I find the atmosphere in my computer science classes to be really fun and focused on problem-solving. Everyone in the class is passionate about computer science, and we get to talk to each other about topics and ideas that we wouldn’t know about without the classes.”

She found the final project in her Linux class especially fulfilling: “I’ve always been a really big sports fan so, with the help of Professor Broder, I decided to look at taxi data in New York City and to see if passengers’ tips are affected by how well their team is doing,” she said. “It was really interesting to see that there was a correlation, as expected, about whether the team won or lost, but it didn’t seem that the margin of victory or loss affected the tip rate as much.”

Being involved in a “big data” project like Dubin’s isn’t just a great way to learn—it’s crucial hands-on experience for potential employers down the road, according to Broder. “Computer science is about more than just computers—it’s about understanding the data surrounding real-world events to learn interesting things,” he said. “An employer or graduate school will be very interested in a student who can take apart big data sets and discover surprising phenomena.” 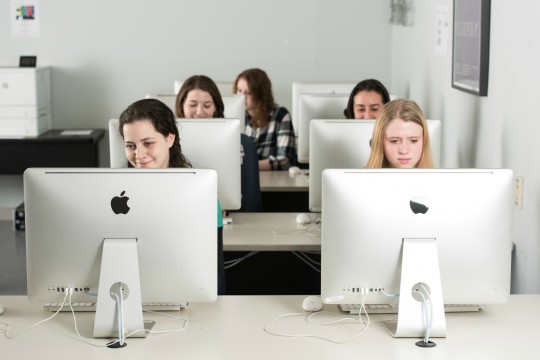 At Stern, computer science students also have options beyond traditional classes to hone their skills and work together to create intriguing projects and connections.

The program has recently been awarded two grants by Google. The first, IgniteCS, supports students’ efforts to mentor local high school students in the field of robotics, while an additional grant provides access to the “Google Cloud Platform” to support cloud-computing education at Stern.

Recent Stern graduate and mathematics graduate student Miriam Herman has also joined the computer science team as an instructor with a focus in extracurricular computing, coaching current students to compete in hackathons and computing events around the country. In addition, the Stern Computer Science Club has been recognized as an official chapter of the Association for Computing Machinery – Women (AMC-W), which advocates internationally for the full engagement of women in all aspects of the computing field, providing a wide range of programs and services to ACM members and working in the larger community to advance the contributions of technical women.

“We’re hoping to have computing be more than just in the classroom, we want it to be a competitive experience,” said Broder. “Employers really want to see potential candidates who are fully committed to computer science and committed to continue learning outside the classroom.”

“The thing that I love, and I guess I’m giving away my creative writing background here, is the ability to give form to the ideas inside my head,” Tropp said. “When you’re able to learn picturing the possibilities for what you can do, it’s like a candy store.”