On April 25, Rabbi Dr. Meir Soloveichik, director of the Zahava and Moshael Straus Center for Torah and Western Thought, and Alan Dershowitz ’55YUHS took the stage in Lamport Auditorium at Yeshiva University’s Wilf Campus to discuss “Anti-Zionism in the Academy: Israel and the Future of American Education.” The lively discussion drew several hundred people and was part of the Marsha Stern Talmudical Academy / Yeshiva University High School for Boys (YUHSB) Centennial Lecture Series and was co-sponsored by the Straus Center. 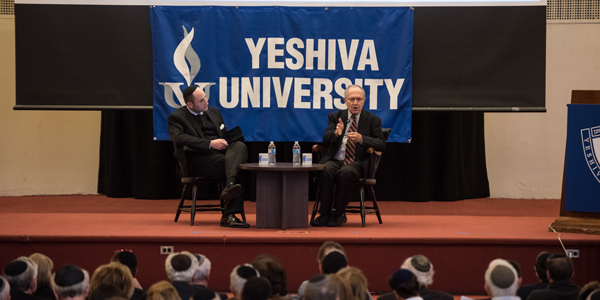 The event was something of a homecoming for Dershowitz, a graduate of YUHSB, who was clearly happy to be among friends and family and delighted to be working with Rabbi Soloveichik, whom he called his “friend and mentor.” In his introduction, Rabbi Josh Kahn, head of school at YUHSB, called Dershowitz “the single-most visible defender of Israel” and thanked him for coming “to share his wisdom with us.”

Responding to questions pitched to him by Rabbi Soloveichik, Dershowitz, who labeled himself a “critical lover of Israel,” mounted a hard-charging case against what he called the anti-Israel “hard left” in academia, timorous pro-Israel professionals fearful of retribution for voicing their support in public, the Boycott, Divestment and Sanctions movement (which he lambasted for holding Israel to a moral double standard), political correctness and intolerance of free speech, and the lack of heartfelt support for Israel from the Obama administration. 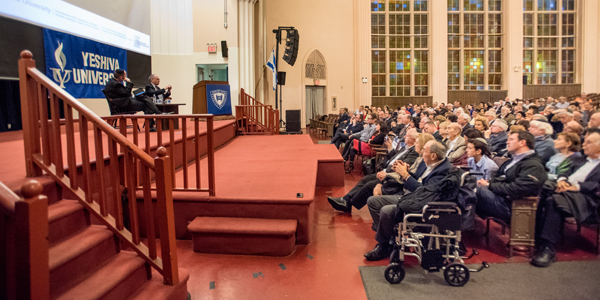 In the place of these extremist arguments from the right and the left, Dershowitz called for making a “balanced, nuanced, calibrated case for the State of Israel,” placing a premium on telling the truth, empirical evidence and a tolerant regard for differing opinions.

However, he wanted the audience to know that even in the midst of making such a case, which American Jews have earned the right to do, “we have to fight with every weapon available to us. Peace for the Jewish people and the nation state of the Jewish people can only come from strength – economic strength, moral strength, political strength—and every kind of strength that we have has to be used in the interest of justice and the interest of supporting Israel. We should never be embarrassed about our strength. Taking a backseat is inconsistent with our obligations and inconsistent with what we have to do to defend Israel.” 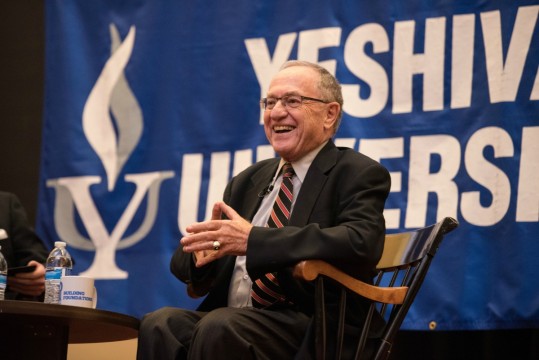 On a lighter note, he recalled his time at YUHSB (then called the Brooklyn Talmudical Academy, or BTA) with great fondness. “At BTA, we were forced to think for ourselves how to reconcile what we learned in the morning and what we learned in the afternoon.” He noted that after his struggles to succeed at BTA, “all my other education was a snap. It was a remarkable place, a place where Zionism was in our hearts and souls. May Yeshiva University High School go on for hundreds of years more.”

Additional YUHSB centennial year events will take place both on the YU campus and in other locations. For more information, go to centennial.yuhsb.org.