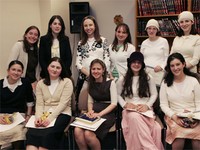 Jun 19, 2006 — The Graduate Program in Advanced Talmudic Studies (GPATS) at Stern College for Women will expand this fall to offer an intensive two-year senior fellowship to two program graduates. It will be the first program of its kind in the United States.

The two inaugural fellows are Elana Stein and Esti Honig, both of Teaneck.

The GPATS fellowship is open to women who have completed the two-year curriculum. The senior fellows will continue their rigorous study of Talmud and Halakhah and play a leading role in expanding GPATS educational programs in various communities. They will also receive leadership training on topics such as public speaking and leading group discussions through Yeshiva University’s Center for the Jewish Future (CJF).

The goal of GPATS is to develop women as both Judaic scholars and role models for the Orthodox community. Launched in 2000, the program is funded by the AVI CHAI Foundation and is directed by Dr. Ephraim Kanarfogel.

“Highly educated women are needed as scholars, as educators, and as role models,” said Rabbi Shmuel Hain, rosh beit midrash (head of the learning program) of GPATS. “The senior fellows, with the help of the CJF, will be better prepared to take on these leadership roles in the Orthodox community.”

Over Shavuot, nearly all of the GPATS students served as scholars in communities across North America, from Nebraska to Ohio to Boston to New Jersey.

On May 24, the program graduated 11 women, the largest class in its history. They will receive a certificate in Advanced Talmudic Studies in recognition of their two years of intensive study of Talmud and Halakhah.

Many of this year’s graduates also pursued graduate degrees in education and this fall will teach at a variety of high schools and colleges.