In Judaism, an eruv is a boundary that symbolically extends the private domain of Jewish households into public areas. To Netanel Paley, however, it also represents a vision—to create a universal Jewish family out of smaller local communities, united by the shared drive to make others’ lives better.

It all started with some leftover cafeteria food. 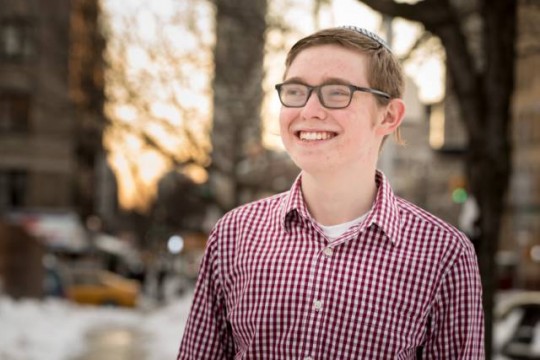 At the end of his sophomore year, Paley, a Yeshiva College student from Teaneck, New Jersey, discovered that he still had a few extra dollars on his caf card. So he and a friend in the same boat spent the money on food to donate to the Jewish Community Council of Washington Heights-Inwood (JCC). As the two carried their bags across the neighborhood, they were amazed to find a vibrant Jewish community just a few blocks away from Yeshiva University’s Wilf Campus.

“I knew there was a strong YU alumni connection with the Mount Sinai Jewish Center, but I felt there was a need to create an even better bridge between the two sides of the neighborhood, because both have so much rich Jewish life to offer,” said Paley.

But what was the best way to do that?

Cue theEruv, a student chessed [acts of charity] network Paley founded on campus to bring the YU community together with others through the values of Torah and acts of kindness. While the club started off as a way to reach out across Washington Heights, its popularity quickly made it a way to connect students from all over New York City by providing them with a myriad opportunities to make a difference: visiting elderly nursing home residents, helping out at soup kitchens or even donating time and energy to Jewish institutions in need of a few extra hands.

“Our mission is to create a close-knit, unified collective of Jewish students in New York City who are actively engaged in giving back to their surrounding Jewish communities,” said Paley. “We hope to foster that unity in the student community with joint Torah events, chessed activities and larger events such as shabbatons and extended learning programs. The eventual vision is to have an organically-connected Jewish community to augment the wonderful and essential work of larger established organizations, such as the UJA Federation of New York and the Jewish Community Relations Council.”

TheEruv has already made a great start toward that goal. Over the recent holiday of Chanukah, the group arranged for YU students to light candles and sing traditional songs with senior citizens in Washington Heights every night, in addition to organizing a Chanukah party with the Jewish Board of Family and Children’s Services for children at the Boro Park Clinic. Eruv members are also kept informed of lesser-attended weddings and celebrations, so student delegations can bring their own excitement and enthusiasm to these events through dance and song. Other events are in the works, including a citywide student shabbaton and day of chessed.

In the meantime, branches of theEruv have sprung up at New York University and the City University of New York—Queens College and are spreading to other institutions as well. Paley hopes that as the organization grows, its base at YU, guided by a board of students from the Wilf and Israel Henry Beren Campuses as well as faculty mentor and assistant director of Rabbi Isaac Elchanan Theological Seminary (RIETS) Rabbi Ezra Schwartz, will continue to provide representatives at those universities with the resources to create and run their own programs to engage their local communities.

Paley, a biology major who hopes to pursue a career in psychiatry, feels that his education at YU has played a formative role in both his spiritual and academic aspirations.

“I came to YU because I wanted to be in an environment where my studies are shaped and enriched by Jewish values,” he said. “For me, Torah U’Madda is as much about harmony as it is integration, and YU is the best place to develop the profound, nuanced appreciation for Torah and secular studies that makes achieving that harmony possible.”

In particular, Paley has found RIETS Rosh Yeshiva Rabbi Jeremy Wieder’s shiur deeply impactful: “He exemplifies the shleimut [wholeness] that drives YU’s mission. His dedication to Torah values and expression of that dedication in the context of social justice reflects the wholeness that I aspire to, and his shiur, along with my peers in his course, fosters an environment fertile for dialogue that empowers me as a student and religious Jew.”

For Paley, though, the highlight of his YU experience has been watching as that small spark of inspiration on a warm summer’s day blooms into a vibrant and growing community built on acts of chessed.

“There are few things in the world more beautiful than seeing someone’s face when you do them a kindness,” said Paley. “I feel blessed to be part of a community in YU where so many people understand that and devote their precious free time to chessed and community service, and I’ve been heartened to see the enthusiasm of the greater New York Jewish community for the sense of Jewish unity that we hope to engender.”