Will Deliver Keynote Address on May 30 and Receive Honorary Doctorate 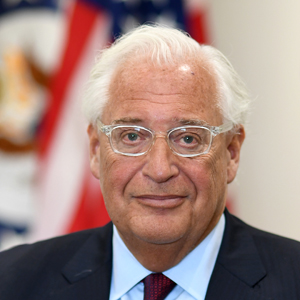 David Friedman, U.S. Ambassador to Israel, will deliver the keynote address and receive an honorary doctorate at Yeshiva University’s 88th Commencement on Thursday, May 30, 2019, at 1 p.m. at the Hulu Theater at Madison Square Garden in New York City.

“I am deeply moved by the honor afforded me by Yeshiva University, a Zionist-driven institution, whose values I have identified with and championed throughout my personal and professional life,” said Ambassador Friedman.

The first bilateral ambassador appointed and confirmed in the Trump Administration, Friedman made history by implementing President Donald Trump’s decision to move the American Embassy to Jerusalem on May 14, 2018, the 70th anniversary of Israel’s independence.

Ambassador Friedman also played a prominent role in President Trump’s historic recognition of Israeli sovereignty over the Golan Heights. In many other ways, Ambassador Friedman has worked tirelessly to strengthen the U.S.-Israel relationship.

Prior to his appointment as Ambassador, he was a top-ranked attorney and a founding partner of Kasowitz, Benson, Torres & Friedman. He frequently represented high-profile clients in large and significant cases and has played a lead role in negotiating multilateral disputes in some of the nation’s most complex cases of business and financial restructuring. He has been active for decades in U.S. policy as it relates to Israel and the Middle East.

Friedman earned a BA from Columbia University in 1978 and a JD from New York University School of Law in 1981.

“Ambassador Friedman typifies the ideals that are central to Yeshiva University,” said Dr. Ari Berman, President of Yeshiva University. “He is an exemplary leader from our community, in both the diplomatic realm and the world of values, who is committed not only to strengthening the U.S.-Israel relationship but also to building a brighter future for people of all nations.”

In all, more than 1500 students from Yeshiva College, Stern College for Women and Sy Syms School of Business as well as graduate students in law, medicine, social work, education, Jewish studies and psychology will be awarded degrees from Yeshiva University during its commencement season.