On Tuesday, September 3, 2019, Yeshiva University and Tablet, a daily online magazine of Jewish news, ideas, and culture, presented “Days of Awe, Days of Anti-Semitism,” a conversation between Sivan Rahav-Meir, an Israeli television newscaster, radio personality and Torah teacher who is at Yeshiva University for the 2019-2020 academic year as the World Mizrachi Distinguished Visiting Lecturer, and Bari Weiss, New York Times journalist and author of How to Fight Anti-Semitism, moderated by Liel Liebovitz of Tablet.

Liebovitz asked the journalists what should be a response to the current rise in anti-Semitism around the world. “The impulse to fight back is not enough,” said Weiss. “We need to use that impulse to dig deeper into ourselves and figure out what our next chapter is going to be.” The questions that we ask ourselves, she explained, should focus on building positive Jewish identity rather than being based on anti-anti-Semitism.

Weiss found inspiration for herself through a lesser-known fact about Theodor Herzl. Two years before writing “The Jewish State,” Herzl’s plan for ending anti-Semitism was a mass baptism, rendering all Jews Catholic and thus eradicating the threat of anti-Semitism.

Yet relatively soon after, in response to the growing anti-Semitism around him, Herzl’s reaction was to dig deeper into his Judaism, which helped him emerge as the father of modern Zionism. He hadn’t been raised with a deep knowledge of Jewish ideas but, instead, came to his understanding of them as a response to the threats he faced.

Rahav-Meir’s approach was slightly different. She commented that her son, who grew up in Israel, had to ask her what anti-Semitism was when they came to the United States. Israel’s ability to create a place in the world where a Jewish child can grow up without knowing anti-Semitism (terror attacks, she noted, were a different story) was a tremendous cause for optimism. 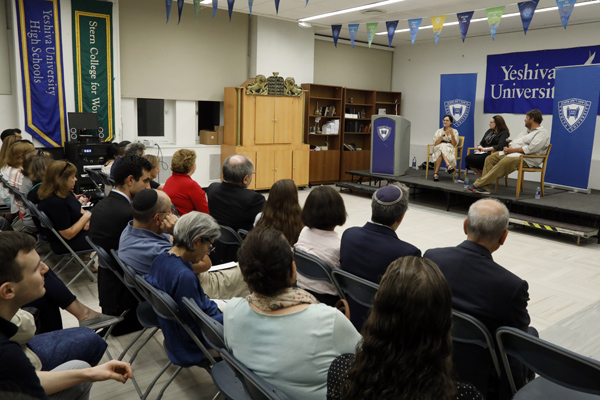 However, Rahav-Meir thought it was a problem that the Israeli and American communities seem to hear about each other more than they talked to each other and that the largest religious groups in both countries (Masorti/Traditional Jews in Israel and unaffiliated Jews in America) are not covered in the mainstream media.

Many people today are searching for value in life greater than the next political debate or the most recent tweet, and many find that in religion, albeit not in its extremes. The fact that there are so many Jews exploring their heritage, including self-described “unaffiliated Jews,” and are connecting with the traditions of their ancestors is incredibly exciting. But if we want people to feel like they are a part of the conversation, she noted, they need to be welcomed and connected with through Torah that speaks to them where they are.

Weiss stressed the potential for a small group of people to make a positive difference in the world. Rahav-Meir followed up by saying that one of the best ways to do this would be to make use of tools such as Facebook, Twitter and Instagram to get positive messages out to the greatest number of people as easily and efficiently as possible.

During the conversation, however, it became clear that Weiss did not necessarily agree with this approach. “What would the world of journalism look like if no one was allowed on Twitter?” Weiss asked the audience rhetorically, before explaining that the echo-chamber effect and instant feedback that social media allows for is a large part of how the American political scene became as polarized as it now is. When commenting on the political extremes of the country, Weiss asked the audience to imagine what a healthy version of nationalism could look like. A nationalism based on the words of America’s founding documents would be that ideal nationalism, she said. “We have the basis to build a strong, healthy, national identity at our fingertips, but it has been largely forgotten today.”

In his introductory comments, Dr. Ari Berman, President of Yeshiva University, noted that Yeshiva University is in a unique position to create a better society. The evening’s speakers embodied the positive possibilities and impact that Jewish values and Jewish teachings can bring to bear on the broader society.