The Federal Reserve Bank of New York Data Capabilities Office, in partnership with Yeshiva University’s Katz School of Science and Health, hosted this year’s “Decisions with Data” conference on Sept. 18, 2019, which showcased practitioners, authors and thought leaders steering advancements in the field of data.

The program was open to New York/New Jersey-area STEM graduate students, who had opportunities to connect with industry data scientists, top faculty, and the most capable data science students around New York City for a day of learning, collaboration and networking.

Casey Henderson, who will graduate from the Katz School in January 2020 with a Master of Arts in Mathematics, found it valuable to learn more about “building a data narrative.” According to Henderson, “the conference had as much of a focus on storytelling, people and communication as it did pure data and technology. It was clear that what industry is now demanding are people who can effectively blend data, visualizations and a narrative.”

Julian Ruggiero, a Fulbright Scholar from Argentina enrolled in the Katz School’s Master of Science in Data Analytics and Visualization, was impressed “by how the presenters used visuals to communicate. The presentations were beautiful and clear while guiding us how we can do the same. It was a great conference.”

“The annual Decisions with Data Conference is the preeminent source of graduate data science talent coming out of leading New York City universities,” according to Dr. Paul Russo, university vice provost and dean of the Katz School. “We appreciate working with the Federal Reserve Bank of New York and look forward to next year.”

The presentations covered the transformational nature of data across a range of fields.

There was also a networking lunch with Federal Reserve data scientists and an Executive Career Panel. 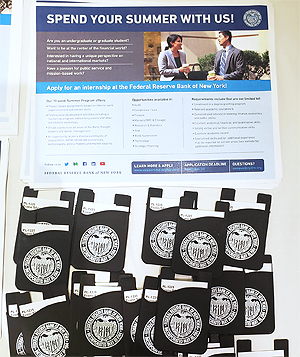 The Federal Reserve Bank of New York offers summer internships for graduate students in data and statistics, among other areas. The 10-week program exposes interns to various projects to enhance their skillsets and prepare them for future opportunities with the Bank. In addition to their daily responsibilities, interns attend weekly presentations hosted by senior management on the Bank’s responsibilities and operations.