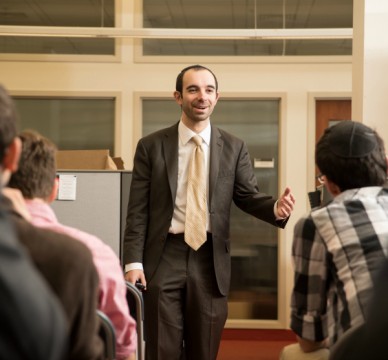 On December 21, the Jay and Jeannie Schottenstein Honors Program and The Zahava and Moshael Straus Center for Torah and Western Thought hosted the final Honors luncheon of 2016 by inviting Rabbi Dr. Zev Eleff ’09YC ’11R to lead a discussion about his most recent publication, Modern Orthodox Judaism: A Documentary History.

Rabbi Eleff is the chief academic officer of the Hebrew Theological College in Chicago and the author of six books and more than 30 scholarly articles. He is also editor of Mentor of Generations: Reflections on Rabbi Joseph B. Soloveitchik.

Modern Orthodox Judaism is a collection of primary materials related to the decades-long argument about what the term “Modern Orthodox” means. “The book is an inquiry into something that philosophers would call ‘indexical change,’” he said, “an investigation into who is assuming the mantle of Modern Orthodoxy at any one time and why.”

Rabbi Eleff demonstrated the ever-shifting meaning of the term through a chronological reading of important documents, where men of renown and influence – former YU President Rabbi Norman Lamm, Rabbi Emanuel Rackman, Rabbi Irving Greenberg, and renowned philosopher and YU Rosh Yeshiva Rabbi Joseph B. Soloveitchik – sparred about what the term meant, to whom it did and did not apply and who should assume “the mantle” of Modern Orthodoxy. As Rabbi Eleff showed, these arguments were both “nebulous” and “dangerous” because they did not establish, and still have not established, an agreed-upon definition.

“Even though I showed my presentation slides in order,” he said, “that does not mean that the confluence of forces is linear at all. It’s a constant shuffling back and forth because there are complex variables all around.” 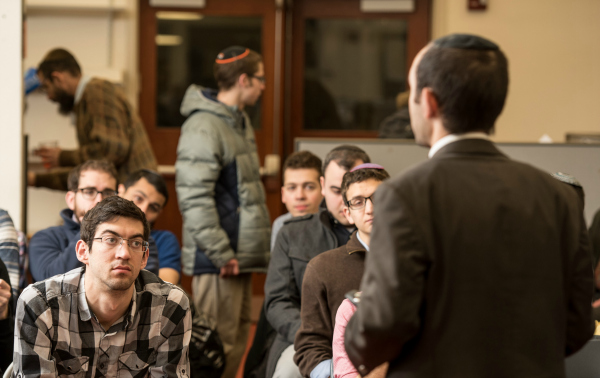 In the Q&A after the talk, one student asked why it was important to have a title at all. “A term like Modern Orthodoxy has shifted meaning in response to historical forces over the last century because definitions and titles matter,” said Rabbi Eleff. In response to another student question, he noted that “sometimes it seems that the arguing is more important than settling the argument—look at the pages of our journals, which are full of struggle. But these arguments have meaning and consequence, which is why people take them so seriously.”

Rabbi Eleff finished his presentation by saying that “taking a step back as a historian, it’s possible to see how religious communities always undergo change, making movements to the left or to the right—I like to look at it as different folkways competing with one another. These movements from fluidity to rigidity and back again are cyclical and dynamic, and that’s what makes it challenging, frustrating—and a heck of a lot of fun.”