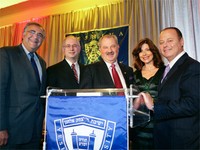 Jun 18, 2009 — Yeshiva University’s three undergraduate schools—Yeshiva College, Stern College for Women and Sy Syms School of Business—held their first combined Undergraduate Dinner on June 17 at Pier Sixty, Chelsea Piers in New York City. In the words of Marjorie Diener Blenden, chairman emeritus of Stern’s Board, the dinner was “a celebration of four individuals who opened their hearts to YU”—Benjamin S. Chouake, MD, Suzanne and Miles Berger and Philip Friedman, all distinguished members of the schools’ Boards.

View a gallery of photos from the event on Flickr.

Friedman founded Computer Generated Solutions, which has grown into a global company with 3,000 employees. A Board member of Sy Syms School of Business since 2003, the Livingston, NJ resident takes an active role in its growth and future. Friedman endowed the Alexander Friedman Scholarship Fund in memory of his father, the recipients of which are mentored by him personally.

“Our students are afforded the opportunity to learn from your experience and wisdom,” President Joel said. “You cherish our students, and in turn, they cherish you.”

“At the end of the day we are all here because we are committed to this great institution,” Friedman noted. “YU has an important role in making sure the Jewish future is secure and that our Jewish children are educated and take leadership positions.”

He underscored the continued importance of a YU education even in times of financial difficulty. “The University plays a major role in partnership with parents in ensuring students become responsible human beings. No Jewish child should be denied an education because parents can’t pay tuition.”

That sentiment was echoed by Chouake, who called YU “the single most important Jewish school of higher education.”

“Even in this battered economy, by coming out you have inspired others,” he told the crowd gathered for the occasion. “Your leadership gives strength to all those involved.”

Chouake founded Emergi-Med, an eight-physician primary care practice in 1984, and holds certifications in internal medicine and emergency medicine. As president of NORPAC, the nations’ largest pro-Israel political action committee, he has become a nationally recognized advocate of U.S.-Israel relations. He sits on the National Council of AIPAC, among other boards, and received its Community Leader Award in 2008. “You have mobilized countless individuals to be ingrained with the same noble duty and ever-important responsibility you carry,” President Richard M. Joel said at the dinner.

A resident of Englewood, NJ he has been a Board member of Yeshiva College since 2003. Chouake, who also serves on the Board of Bernard Revel Graduate School of Jewish Studies, and his wife, Dr. Esther Hershenbaum, established the Esther and Ben Chouake Scholarship at Yeshiva College.

Suzanne Berger joined Stern College’s Board four years ago, a move precipitated by her commitment to Judaism, understanding of its underlying importance and value in a secular-dominated education system and her daughter’s attendance at Stern. She spoke at the dinner of leaving each of her board meetings, where students present their latest research or share their experience of studying at Stern, with “a sense of exhilaration and pride.”

She and her husband, Miles, chairman of the Berger Organization, have been married for 30 years. “Our students are inspired by you, by your dedication to their every pursuit,” said President Joel. “You open your home to raise awareness for Stern College, to bring together men and women of conscience in the hopes of advancing our sacred mission.”