Created by Tova Rosenberg, director of Hebrew language studies and Israel exchange programs at Yeshiva University High Schools, the Names, Not Numbers program transforms the testimony of the Holocaust by taking it beyond traditional classroom walls and turning it into an interactive, creative and empowering educational lesson.

For the last 14 years, Names, Not Numbers has been taught at the high school level. However, last year, Rabbi Yosef Kalinsky, associate dean of the undergraduate Torah studies program at YU, worked with Rosenberg to adapt it for students in the Isaac Breuer College of Hebraic Studies. This year, with the assistance of Dr. Karen Bacon, The Mordecai D. Katz and Dr. Monique C. Katz Dean of the Undergraduate Faculty of Arts and Sciences; Ethel Orlian, associate dean of Stern College; and Meirah Shedlo, academic coordinator, Names, Not Numbers was offered at Stern College for the first time this year. The course was taught by Dr. Mordecai Paldiel, adjunct professor in Jewish history and a Holocaust survivor himself.

In addition to the guidance offered by Rosenberg and Dr. Paldiel, the students learned interviewing skills from documentarians Lynn Novick and Sarah Botstein, who have worked closely with Ken Burns, and Dr. Michael Berenbaum, a renowned Holocaust scholar, Emmy winner and consultant in the conceptual development of museums and historical films. Filmmaker Michael Puro ’00YC taught the students the mechanics of filming and editing, helping them whittle down one and a half hours of material into a tight 20-minute oral history. 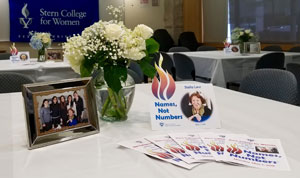 The experience had an enormous impact on the students, and the thoughtful comments of Channa Buxbaum captured the depth and breadth of that impact for everyone involved in the project. “I’ve always lived my life in the shadow of the Holocaust—both my grandmother and grandfather were survivors, and I remember as a child wondering why sometimes my grandmother was the usual bubbe, baking us things and loving us, and then I would hear her waking up from nightmares screaming. So, the Holocaust always been something I’ve wanted to know more about.

“There is a totally different experience hearing about the Holocaust from the mouth of someone who went through it rather than from the pages of textbook—it really brings the story to life in a way I’ve never heard before and really inspires me to continue hearing people’s stories. When I asked Ms. Klein how she could survive on a human level—How did you feel about God? Weren’t you angry?—she didn’t want to talk too much about that. Instead, she wanted to talk about how she rose from what she went through.”

“Tonight, we are remembering the stories of the Holocaust,” said Rosenberg in her introduction to the film’s screening, “so that the world will hear and the world will learn. We want to inspire future generations to combat anti-Semitism and all forms of hatred and intolerance. The personal story provides an opportunity for the student to come to know the face, the heart and the spirit of an individual eye-witness. Through Names, Not Numbers, they are making a personal connection to history and will have, as Elie Wiesel wrote, ‘a solemn obligation to the survivors to ensure that their experiences and their memories become an integral part of the historical record.’”

In speaking about the project, Dr. Bacon noted how “all-encompassing this project became, not only physically, in terms of what needed to get done, but also emotionally and intellectually. This is a remarkable project because the students are not just learning about history, they’re reporting on and internalizing the history, and once they’ve gone through that process, they will never forget and the history becomes part of a legacy that they will pass on to another generation. I know that the connection they’ve made with the survivors and with their own sense of who they are as Jews has changed the lives of our students.”

New York City Councilmember Mark Levine also shared his sense of the course’s significance. Levine was a co-sponsor in 2015 of the Elie Wiesel Holocaust Survivor Initiative, which provides $2.5 million to fund assistance for the 45,000 Holocaust survivors who live in the New York metropolitan area. “It is so important that we get this story told,” he said, “in order to combat a lack of knowledge about the Holocaust among Americans, and we can do this by memorializing these stories and ensuring that the next generations receive the wisdom in the first-hand accounts of these brave people.” 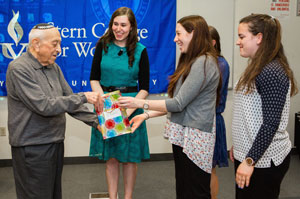 After the showing of the film, the students presented their interviewees with the gift of a DVD of the complete interview along with a picture of each team.

Names, Not Numbers INC© is an interactive, multi-media Holocaust project created by educator, Tova Fish-Rosenberg. To date, 6,000 students have interviewed and filmed 2,000 survivors and World War II veterans throughout the United States, Canada, and Israel as part of the project. It is generously supported by a prominent national foundation, and all 200 documentary films Names, Not Numbers has produced have been accepted into the archives of the Jewish National and University Library of Israel at the Hebrew University of Jerusalem. In addition, they are being archived at Yad Vashem and the Mendel Gottesman Library at YU.