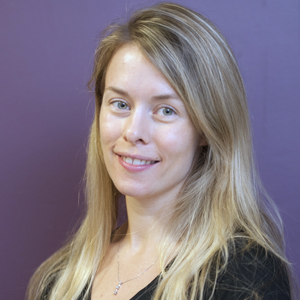 Dr. Kate Walsh is assistant professor of psychology (tenure-track) in the Clinical Psychology Program of the Ferkauf Graduate School of Psychology, with a BA from Boston University and a PhD from the University of Nebraska-Lincoln. She completed her internship at the National Crime Victims Center at the Medical University of South Carolina and a postdoctoral fellowship in the Department of Epidemiology at Columbia University.

Dr. Walsh joined the faculty in Fall 2014 and has taught courses in Cognitive Assessment and Violence, Emotion Regulation and Substance Abuse. Her research focuses on trauma exposure, particularly sexual assault, and mental health outcomes including post-traumatic stress disorder and substance use disorders. She has a particular focus on mechanisms including emotion dysregulation and neuroendocrine reactivity that explain the development of negative sequelae, of aftereffects, among those exposed to sexual violence, and she has received funding from the National Institute on Drug Abuse to identify biopsychosocial pathways to developing substance use and risky sexual behaviors.

She has also submitted a funding proposal to the Department of Defense to develop an intervention to prevent sexual harassment and assault in the military, and she has a number of ongoing projects focused on sexual assault in other settings, such as college and prison, and among other groups, such as adolescents.

Currently, she has published 69 peer-reviewed articles (34 as first author) and six book chapters and has made 75 peer-reviewed presentations at conferences.

YU News sat down for an interview with Dr. Walsh to talk about being a child of the military, the interplay of biology and psychology in trauma and her future-forward thinking about getting at the root causes of sexual violence in our society. The interview has been lightly edited for space and consistency.

Where did you grow up, and was there anything in your growing up that led you to your current research interests?
My dad was in the Army, so I’ve lived all over the United States and in Panama, but I call Maine home, because that was where I went to high school, and my mom and grandparents still live there.

I think my dad’s military service definitely influenced my interest in trauma and the military. I became especially interested in sexual violence when doing phone screens for a post-traumatic stress disorder treatment study during college, and I was struck by the alarming number of callers who mentioned experiencing not just one sexual assault but multiple assaults over the course of their lives, and that led to my interest in sexual revictimization.

How does this connect to the aspect of your research on linking emotional regulation to neuroendocrine activity, the intersection of psychology and biology or “biopsychosocial pathways”?
I wanted to understand why some individuals experience multiple sexual assaults while others experience none or just one. Neuroendocrine reactivity, which is involved in the body’s stress and flight/fight response, seemed like a logical mechanism to investigate. Those with extensive trauma histories often show blunted neuroendocrine reactivity, which may suggest that the body’s warning system is not functioning typically. Along these lines, I became interested in how people appraise risk in sexual situations, whether a prior history of assault influences that and whether emotion dysregulation or neuroendocrine dysregulation in these scenarios is a reason that individuals with a prior history take longer to identify risk and respond to such risk.

You were invited to work with the Department of Defense on preventing sexual assault.
In 2014, I published a paper in Women’s Health Issues on how unit support during deployment protected against sexual assault and harassment during deployment. That publication led to an invitation by a congressperson and the head of the National Guard to develop a brief intervention to prevent sexual violence in the National Guard.

Although the project was not funded, this past October, I submitted two Department of Defense proposals to develop sexual violence prevention programming in the military (one of which would be a partnership with the U.S. Military Academy at West Point in New York State).

What brought you to Ferkauf?
I came to Ferkauf because I was seeking a program where I could train graduate students in clinical psychology in both research and clinical work that would also allow me to stay in the New York-area so that my husband, Nate, could continue his career in software development.

On both professional and personal levels, I was really impressed by the faculty and students when I interviewed, and over the five years I have been here, my commitment to both the school’s mission and my colleagues has only gotten deeper and broader.

Being at Ferkauf also seems to have fueled your scholarly efforts as well.
That is true—I’ve been able to continue collaborating with colleagues at Columbia and have published a total of 69 papers to date (with two that have just been resubmitted and should be in press shortly). I have an H-index of 28, which indicates that I have 28 papers that have each been cited at least 28 times. I think the median for assistant professors is approximately 10, according to research done by Dr. John Ruscio at the College of New Jersey, so I feel accomplished about both my output and the effect it’s having on the field.

What do you do when you’re not being so super-productive?
I have two young children (Allora, 4½, and Camden, 2), and I love spending time with them my husband at our weekend house in the Catskills. I also love running. I run a few half-marathons each year and ran the full New York City marathon in 2011. I have a passion for cooking healthy vegetarian meals, and I love to read mystery and spy novels—I like investigating and solving problems even when I’m not thinking about my own research.

What future do you see for yourself academically and personally?
I’m very committed to making a dent in the sexual violence epidemic, and the #MeToo movement gives me some hope that funders might be motivated to support this. Since we started systematically tracking rates of sexual assault back in the 1980s, we’ve observed consistent rates of sexual violence despite implementing a number of prevention programs. We need truly interdisciplinary research to target the myriad factors that increase risk for sexual violence in our society, and I hope to be an important contributor to this conversation.