Two Decades of Service Leave an Indelible Impact on the University 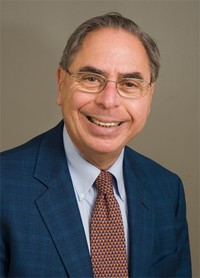 At the end of August, Dr. Morton Lowengrub formally retired from active duty at Yeshiva University after spending 20 years in service to the institution. For much of that time, he served both as a senior administrator (vice president for academic affairs [1999-2007] and provost and senior vice president [2007-2014]) and director of the graduate program in mathematics (2015-2019).

But when asked how he would describe himself, Dr. Lowengrub had a very simple answer: “My main interest has not been in administration, even though that’s not what my record says—my main interest has always been mathematics. I’ve been very active in all ways with mathematics.” He was a sought-after and well-respected professor, mentor and adviser, whose research interests ranged across many different fields and disciplines.

His love of mathematics, though, not only comes from the pure intellectual delight he gets from the subject. He also gets tremendous delight in working with his students and his colleagues, a point he kept circling back to during a 90-minute conversation.

“I am very proud of my students —my whole entire career has been teaching and mentoring, at all levels.” He reels off the names of former students, like Lawrence Shovanec, who is the current president of Texas Tech University, and Elinor Ostrom, a co-winner in 2009 of the Nobel Memorial Prize in Economic Sciences, along with YU alumni Yael Eisenberg ’19S, her brother, Yishai ’18YC, and Marjorie Liebling ’19S, all of whom have gone on to do advanced work as graduates of the YU math program.

He also had nothing but high praise for the people in his department. “Our PhD program has been enormously successful, and our students have been wonderfully trained. I have fantastic colleagues in Marian Gidea, Wenxiong Chen, Antonella Marini and Pablo Roldan. This University is very fortunate in having a group like this.”

He succinctly sums up his overlapping careers of teaching and administration: “As dean and provost, as department chair and teacher, I have always been very faculty- and student-focused.”

Dr. Lowengrub’s journey to Yeshiva University began eighty-five years ago in Newark, New Jersey, though “if you go back in the history of my family, there is no genealogy which would tell you that mathematics was very much a part of the family.” He earned a BA in mathematics at New York University, a master’s at the California Institute of Technology and a PhD at Duke University, studying with Ian Naismith Sneddon, who became his thesis adviser.

After stints at North Carolina State University and Wesleyan University in Connecticut, he landed at Indiana University in 1977, where he worked for the next 22 years as a department chairman and the dean of both Research and Graduate Development and the College of Arts and Sciences in addition to his teaching.

“It was not my intention to become a college administrator,” he observed, “but they would always ask my advice about matters, and when I gave it to them, they returned the favor by appointing me to these positions to carry out the advice I gave them.”

In 1999, Dr. Norman Lamm, then-president of YU, began to recruit Dr. Lowengrub for the position of vice president of academic affairs. “When I came and talked to Dr. Lamm, I liked him instantaneously, but I could not make up my mind about the offer,” in part because the offer made him reflect upon his own Jewish upbringing. “I have a great respect for the way I was brought up, and I think a lot of my successes has been because of the immersion in Torah when I was young.” He added, with a laugh, that “while I didn’t always like studying Talmud Torah from three to sometimes 8 o’clock at night, what it did for me was create an ethic of studying. And I thought about that while I was talking with Yeshiva, and I realized that maybe I could give something back—honestly, that’s how I thought. And I told Carol, my wife, that, and I told the Board of Trustees that—I felt that maybe I could give something back to what I had been given.”

What tipped the balance for him was the conversations he had with students that Dr. Lamm arranged for him. “I was blown-over. Of course, they picked the right students, but I hadn’t seen students this engaged and this bright.” He also felt that he would be able to help YU resuscitate its mathematics program. “Finally, we came to a conclusion that I should come.”

His overall assessment of his effect upon the University is positive. “I’m very pleased with what we were able to do. We just changed the landscape. But I could not have done any of what I managed to accomplish without the strong and ongoing support I received from both the faculty and from Richard Joel, whose leadership of the University was, I believe, exemplary. It was a privilege to work with him.”

Many of his colleagues and students would more than agree with that assessment. Dr. Pablo Roldan, assistant professor, named Dr. Lowengrub “a man of great integrity who always prioritized teaching and research over anything else,” and Dr. Wenxiong Chen, chair of the mathematics department, praised him for building “a strong department of mathematical sciences with several first-rate pure and applied mathematicians.” For Dr. Marian Gidea, professor of mathematics, Dr. Lowengrub’s “sheer love and devotion to students is palpable. As a university leader, he has been a steadfast promoter of academic excellence and shared with YU his unparalleled experience and wisdom with a grace, generosity and human warmth that is unmatched.”

As a former student of his, Marjorie Liebling, currently a PhD student in computational biology at Cornell University, remembered that “his lectures are theoretically rigorous, his exams are notoriously challenging, his expectations for hard work and excellence are incredibly high and his investment of time and effort into each student is unbounded. As a community, we remain forever grateful to Dr. Lowengrub for the enormous impact he has made on our institution and wish him much success in all future endeavors.”

“Dr. Lowengrub’s dedication to his students’ success,” said Yael Eisenberg, “knew no bounds. His office door was always open for students to struggle through a mathematical problem together, ask for guidance on their research or a wise piece of advice. I’ve learned a tremendous amount from Dr. Lowengrub, and I’m sure he will continue to impact mathematics in the future.”

His time at YU may be winding down, but his to-do list is already full of post-retirement projects, which he will pursue at Stanford University. Most importantly, he will continue to mentor his thesis students. “You can’t leave graduate students—they’re writing theses with you, they’re part of you. And I feel very strongly about that.”

High on his list is completing work on a 3,000-page book on calculus covering the basic undergraduate curriculum, a project he’s working on with his older son, John, who is a distinguished professor at the University of California, Irvine, in mathematics and biomedical engineering. “Today, calculus needs to be taught differently so that it becomes useful to students in computer science and in areas of data science.” This book will combine two of his previous publications.

Another project involves doing new research in materials science that will help him update and modernize a book he did in the 1960s, Crack Problems in the Classical Theory of Elasticity. “I’m really having a good time thinking about the whole thing,” he said with a chuckle; “it wakes me up at night.”

His overall goal for his retirement: “I want to write—I have a lot of things to say about mathematics, and that is what I want to do.”

The purity and clarity of this goal echoes something he did early on his career at Indiana University. As dean for Research and Graduate Development, and later as dean of the College of Arts and Sciences, he played a major role in the planning and construction of the WIYN 3.5-meter telescope. Why? “I am a very strong believer in astronomy. It’s a great way to teach students science; you have a natural laboratory because you have to go outside and look up.” His predecessors, he pointed out, had tried to close the program down, “and I thought that was a terrible idea.” He joined with the National Science Foundation, University of Wisconsin and Yale University to found a consortium for money, staff and programming. “It was wonderful to be working together.”

He has a picture of the asteroid, an oblong of white light against an ink-dark background making its way around the sun every five years and 10 months. Because of his love of math and his dedication to teaching, something that had been unseen was now seen, something beautiful had been revealed—a fitting tribute to the all the work he has done for his institutions and students and to all the discoveries he is poised to uncover.