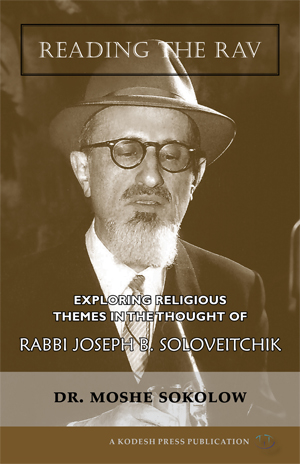 (A full video of the lecture can viewed on the Yeshiva Academic Institutional Repository.)

Dr. Sokolow’s purpose in writing the book was not to add another volume to the large body of work written about the Rav but instead use the man’s work to take the Rav “to places where he himself never went.” In this particular case, being an educator, Dr. Sokolow wanted to excavate “the mine of his erudition” to tease out what might have been Rabbi Soloveitchik’s thoughts about Jewish education, a subject he never tackled directly.

To do this, he examined two well-known works: The Lonely Man of Faith and Fate and Destiny (often known as Kol Dodi Dofek). At the heart of each of these works, said Dr. Sokolow, is a dialectic that, if examined closely, provides the outline of what the Rav might have considered a proper and effective Jewish education.

In the former work, the dialectic in play is between Adam 1, the man who seeks to control the external world, and Adam 2, the man who seeks to control his inner world. The synthesis of the two results in a person who has the skills to subdue the stuff of the earth but guided by an introspection that provides limits, insights and humility, a condition that is “whole internally and successful externally.”

In the second work, he finds a tension between fate, which can result in passivity, where the person is moved by “the forces of the environment,” and destiny, “an active mode of existence, one wherein man confronts the environment into which he was thrown.” Too much fate, and stagnation may occur; too much destiny, and hubris may rule. The synthesis results in a person whose strength of faith guides the life-choices destiny offers, life-choices best shaped by Torah study and an observant life.

Dr. Sokolow concluded that if the Rav were to write directly about what a Jewish education should be and do, he would focus on how that education would build within students these creative tensions between the need to be active in the world balanced by the need to ensure that such worldly action is guided by introspection nourished by Torah study.