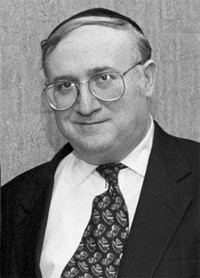 Oct 13, 2008 — Aaron Levine’s analysis of the current financial meltdown through the lens of Jewish law was the subject of an article, ‘The Financial Crisis: What Would the Talmud Do?’ published on Time.com on Oct. 10.

Dr. Levine, the Samson and Halina Bitensky Professor of Economics and chair of the economics department at Yeshiva University, turned to Halakhah in ‘The Recession of 2008: The Moral Factor — A Jewish Law Analysis,’ which will appear in a forthcoming book, “Judaism and Economics,” published by Oxford University Press.

“[Dr. Levine] thinks that today’s capitalism needs to be a little more bounded ,” writes journalist David van Biema. “That term includes the poor man who mistakenly takes an impossible mortgage. But increasingly it may mean all of us. In regulating, says the rabbi-economist, ‘we have to imitate God, in the way He shows compassion and mercy when he deals with mankind.’”