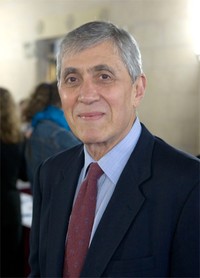 Dec 12, 2007 — Allen M. Spiegel, MD, The Marilyn and Stanley M. Katz Dean of Albert Einstein College of Medicine, has been elected a trustee of the New York Academy of Medicine, a nonpartisan institution whose mission is to enhance the health of the public. The board, which currently consists of 29 members, sets the academy’s policy and has fiduciary responsibility for the organization.

An internationally recognized endocrinologist, Dr. Spiegel has been dean at Einstein since June 2006. In conjunction with his role at the medical school, he also is vice president of medical affairs at Yeshiva University.

Prior to joining Einstein, Dr. Spiegel served as director of the National Institute of Diabetes and Digestive and Kidney Diseases (NIDDK) of the National Institutes of Health (NIH) from 1999 to 2006, a position that capped a distinguished 30-year career at the NIH. He joined the NIH in 1973 as a clinical associate in its Endocrinology Training program. He then served as a senior investigator in the Metabolic Disease Branch from 1977 to 1984. In 1985 he was appointed chief of molecular pathophysiology, and then chief of the Metabolic Diseases Branch. He was simultaneously appointed director of the NIDDK’s Division of Intramural Research. He served in these various capacities until his appointment as director of the NIDDK.

Dr. Spiegel received his undergraduate degree from Columbia University and his medical degree from Harvard Medical School. He is a resident of Manhattan.