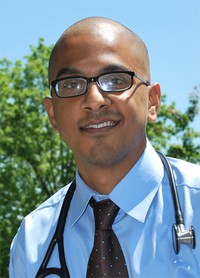 Jun 4, 2009 — Vikram Padmanabhan realized he was drawn to medicine as a way to practice science and physiology “with a human touch” when his students at Lehman High School in the Bronx came to him with health problems. After three years as a teacher, Padmanabhan decided to combine his love of science with a desire to keep “one foot in the real world” by pursuing an MD at Albert Einstein College of Medicine.

Now, the new doctor is heading off to a residency in internal medicine at Massachusetts General Hospital in Boston, his first choice.

In addition to having scientific papers published in such journals as Neuroscience, Padmanabhan has won praise for his non-academic writing. He wrote about his experience caring for a dying patient in a moving essay, “My Condolences,” published in the Annals of Internal Medicine in 2008. He will have two pieces published later this year: “A Neurology Rotation in Haikus,” in Neurology, and “Noises From Below,” a light-hearted piece about dealing with a difficult pediatric patient, in Family Medicine Journal.

Padmanabhan, who grew up in St. Paul, MN, and received his BS degree from Washington University in St. Louis, was inspired by Leslie Bernstein, professor emeritus at Einstein, who volunteers his time to teach students and residents.

“After 50 years of practicing medicine, he still enjoyed the art of bedside manners, physical diagnosis and teaching. He demonstrated that one can learn a lot from patients just by listening to them,” Padmanabhan said.

An aspiring clinician and medical educator, Padmanabhan said his eyes were opened by working in the Bronx. From the beginning, patients called him “doctor” and when he protested, one said, “You may only be a student, but I need your help.”

“Those words stuck with me,” Padmanabhan said.