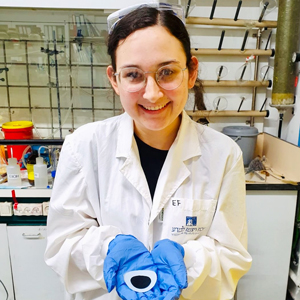 Eliana had a rarefied summer working in the Boris Rybtchinski Lab in the Department of Organic Chemistry at Weizmann Institute of Science in Rehovot, Israel. “My research is in the ‘sustainable nanomaterials’ portion of what the lab does. We combine carbon nanotubes with organic dye nanocrystals to produce a hybrid nanocomposite in the form of a thin film that is electrically conductive and mechanically robust.” These films can be deposited on many surfaces and used as electrodes in energy storage devices. “I worked on a method which recycles the excess dye and solvent in order to make it more environmentally friendly when taken to industrial manufacturing.”

The support for her work came from several sources, including a weekly stipend from Weizmann, housing at the Hebrew University Faculty of Agriculture and a research grant from the Jewish Federation for Education of Women.

“It’s incredible to get to work in such a place as the Weizmann Institute where significant discoveries are being made in real life, all around me,” she enthused. “It’s not every day that one gets to work down the hall from a Nobel Prize winner in chemistry. I love accomplishing new feats—be they big or small, personal or communal—and watching science come to fruition by the very minds and hands of myself and my colleagues. By working, so to speak, ‘behind the scenes,’ I am witnessing the slow, careful, laboratory work that must be done.”

At Stern College, her biochemistry work is on the pre-health track and involves taking rigorous science courses with intensive lab work, averaging about six hours per week per semester. “Joining the lab at Weizmann has given me the opportunity to take all of the skills and knowledge I acquired at Stern and to put them into action in real research. While most of my peers at Stern are also headed to work in healthcare, my colleagues at Weizmann have chosen to invest their time into the science that not only supports but enables healthcare workers to do their work.”

After graduating from Stern, her plan is to attend dental school and specialize in orthodontia. “Working in a material science lab is an appropriate stepping stone to the work I will one day do,” she explained, “because much of what a dentist or orthodontist does requires one to understand the materials he or she is working with, to know the chemical compositions and the relevance of the structures and interactions of the materials.”

Eliana fully acknowledges the influence of her mother on what she has chosen to do. “I have followed my mother’s path. She studied material science engineering at the Massachusetts Institute of Technology and also spent a summer doing research at Weizmann. Similarly, she went into healthcare and is a practicing physician today. My mother says that the time she spent here at Weizmann not only influenced her work but also played a large part in shaping her Jewish identity. I too know that I will look back on this experience with a great appreciation for what it has given me.”