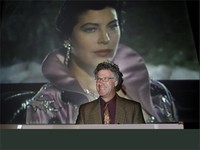 Feb 16, 2004 — In the final scene of the 1926 Broadway production, The Day of Atonement, Al Jolson’s character scrubs his Broadway debut to chant the Yom Kippur Kol Nidre service at his father’s synagogue. In The Jazz Singer, the 1927 movie remake, a new final scene has Jolson back on stage, his stint as cantor merely a detour on the road to stardom—and the American dream.

“Hollywood filmmakers, in those days mostly Jews, wanted to escape a world they viewed as holding them back. To the four Warner brothers who made The Jazz Singer, the first talking motion picture, an outcome where the Jolson character gives up his career was inconceivable,” said Dr. Eric Goldman, an expert on Yiddish, Israeli, and Jewish films.

He presented this year’s Morris Epstein Forum on the Arts Lecture February 10, “Looking at Ourselves: The American Jewish Experience in Film,” at the Geraldine Schottenstein Cultural Arts Center on the Israel Henry Beren Campus.

“When Jews make films about Jews, we learn a great deal about how they perceive themselves and the Jew’s place in society at that point in time,” said Goldman, founding president of Ergo Media, a video publishing company specializing in Jewish and Israeli video and author of Visions, Images, and Dreams: Yiddish Films Past and Present.

While in the early years Jewish filmmakers often depicted the immigrant experience, Goldman said that by the mid 1930s they had shifted focus to more “American” issues. Even in the late ‘30s, as the nation confronted Nazi persecution in Europe, they remained inured, by then too afraid of jeopardizing Jews’ stake in America by raising the specter of anti-Semitism. Only Charlie Chaplin, a non-Jew, dared tackle the issue, in his classic The Great Dictator.

After World War II, it took another non-Jew, producer Darryl F. Zanuck, to confront anti-Semitism in America. Gentlemen’s Agreement, about a journalist posing as a Jew to experience anti-Semitism first-hand, garnered the 1947 Academy Award for Best Motion Picture.

In the 1950s, films with muted Jewish characters, like Marjorie Morningstar, The Young Lions, and The Caine Mutiny paved the way for Exodus, Cast a Giant Shadow, and The Fixer in the ‘60s, when Jewish filmmakers felt emboldened enough to feature strong, ethnically-identified Jews as main characters, Goldman said.

Since then, filmmakers have tackled Jewish themes—sometimes with sensitivity, other times with ridicule—with a Jewish consciousness that asks: What does it mean to be a Jew in America?

“How does acceptance impact on our lives as Americans and as Jews? I think filmmakers today are confronting that. They are no longer running from their Jewishiness, but are dealing with it,” he said.