At a recent presentation to students in the Jay and Jeanie Schottenstein Honors Program at Yeshiva College, Mordechai Kornbluth ’12YC shared research he has been conducting into what he called “nano checkerboards.” The term describes an interesting phenomenon that occurs when atoms of magnesium and gallium, which normally do not bind together, are brought together under certain conditions which align them into checkerboards, with the squares alternating between the two elements. These checkerboards are incredibly small (“nano” is a prefix which means “one billionth”), on the order of four nanometers wide. 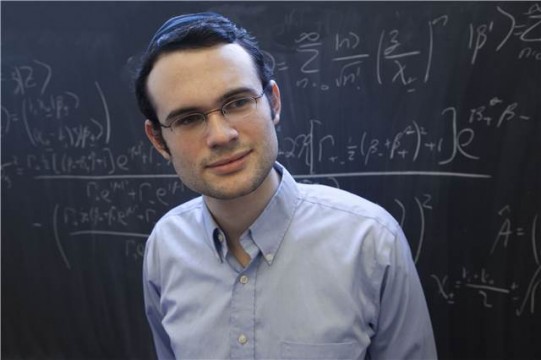 This research may eventually have practical applications in both computer memory and improved batteries for electric vehicles.

Kornbluth also discussed possible vocational paths for physics graduates. His current research is funded in part by a grant from the Advanced Research Project for Energy (ARPE) and beginning in April 2017, he will begin a job with Bosch Enterprises (who is currently managing his ARPE grant) after obtaining his PhD from Columbia School of Engineering. Kornbluth noted that physicists who want to focus on computational work can find a home with pharmaceutical companies working on drug design, while those interested in materials research and experimentation will find jobs in many different industries (like Bosch, which is moving forward with electric cars).

He also encouraged students to publish research as early as they can. “Having several publications under your belt as an undergraduate will help you immensely when it comes time to apply to graduate school,” he said.