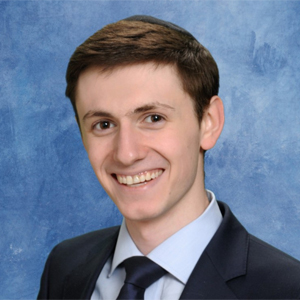 CJ Glicksman ’20YC of Teaneck, New Jersey, the 2020 valedictorian of Yeshiva College, is graduating with a double major in philosophy and music. In the fall of 2019, he joined the MafTeach Chinuch Fellowship offered by the Azrieli Graduate School of Jewish Education and Administration and directed by Dr. Deena Rabinovich, chair of the Rebecca Ivry Department of Jewish Studies and director of the Legacy Heritage Jewish Educators Project. The program offers juniors and seniors at Yeshiva College and Stern College for Women, especially those who may not have previously considered being teachers, an opportunity to experience careers in Jewish education and get a head start on their graduate work in education. The yearlong fellowship includes an internship at a Jewish day school as well as the opportunity to work with Jewish educators in schools in hosting communities around the country and with Azrieli faculty.

YU News had the pleasure of speaking with CJ about his time at Yeshiva University, what his MafTeach experience was like and his plans for the future.

What was your Jewish education like as you grew up, and what convinced you to attend YU?
I attended Jewish day schools: Rosenbaum Yeshiva of North Jersey and the Marsha Stern Talmudical Academy. In high school, I wasn’t entirely sure I wanted to go to YU, but after much discussion with friends and family, I realized that the values I consider most important to me are the same values that YU espouses. I would have to say that my three years at Yeshiva University have been the most valuable years of my life. I have grown and matured not only academically, but also as a person and as an eved Hashem [servant of G-d].

How and why did you become involved in MafTeach?
I became involved with MafTeach after speaking with two close friends from the program’s first cohort about their experience on the program. At the time, I was peripherally considering a future in education. I then got in touch with Dr. Rabinovich, who explained that the program might be a good way for me to get an idea of whether or not I would really be interested in a career in Jewish education.

I stayed in Beverly Wood, California, visiting the Harkham Hillel Hebrew Academy. We visited the community three times, with one two-week visit spanning our winter break. The families and faculty members of the community were unbelievably welcoming and warm, and they asked us to stay in touch, offering to help us in the future in whatever way they can.

How has the MafTeach program influenced your views on Jewish education?
I had no background in Jewish education, or any education for that matter, coming into the program, and I really have learned a lot through my participation. What struck me in particular was that the stated goals of Jewish education seemed to be unlike those of education more broadly. Success as a Jewish educator is not necessarily measured in the amount of information retained by a student or in a student’s grades but rather in his or her appreciation for Jewish values and developing relationship with G-d. This was especially apparent to me when observing the priority given to the davening [prayer] programs of different age groups at different Jewish day schools and the focus placed on having students understand and appreciate their daily prayers.

Was there an “ah-ha” moment that you experienced, when something became clear to you?
When speaking with Rabbi Y. Boruch Sufrin, the principal of the Harkham Hillel Hebrew Academy, he imparted an idea relating to education that really spoke to me. Rabbi Sufrin remarked that students crave the respect and love of their teachers and hope that their teachers value their intelligence. Ultimately, he said, a successful educator is able to communicate this respect to his or her students. Reflecting on my own experience from the other side of the classroom, this struck me as an exceptionally accurate assessment.

What did you learn about yourself and the community you served?
Coming into the program, I was not considering a career in education very seriously; I only really had it as an option in the back of my mind. But the program has exposed me to education in a way that I haven’t been before and has given me hands-on experience in a way that has made the field of Jewish education seem like something that I really might be interested in.

In addition, I come from Teaneck, New Jersey, and have grown up going to very large mainstream schools. Being sent out of town has shown me that YU, as an institution, is integral to modern-orthodox communities all over the United States.

What are your next steps?
I am now considering a career in Jewish education very seriously, and I’ll be working as a Beit Medrash Fellow at SAR High School next year.

What would you say to a YU student who is considering applying to the program?
If you are at all interested in exploring the field of education, regardless of how seriously you are considering it at the moment, it would be very worthwhile to get involved because it gives participants hands-on experience teaching and getting to know what it might be like to teach for a living. Especially a student coming from Yeshiva College, where an education program is entirely lacking, it would be incredibly beneficial.

Is there anything else you would like us to know?
I’d like to express gratitude to Dr. Deena Rabinovich for all the hard work she has put into organizing the school visits and the seminars for the cohort!