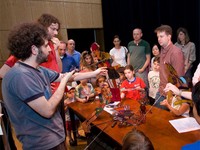 Jun 24, 2008 — Puppet troupes representing the folk culture of China, Greece, and the Czech Republic delighted the overflow audience at Yeshiva University Museum’s second annual Family Puppet Festival on June 22. Their colorful displays told enchanting tales of a hero fighting a tiger with bare hands, a shepherd outwitting the devil, and a poor, lazy, charismatic villager who connives his way into becoming a teacher.

Kenneth Pinczower, a 1989 Cardozo graduate who lives in Riverdale, NY, was pleasantly surprised at how much his six children, ages 16 months to nine years, enjoyed the shows.

“I didn’t really know what to expect,” Pinczower said, “but all my children loved it. They were jumping up and down and dancing and having a great time.”

The troupes that performed were Chinese Theatre Works, the only professional company in the United States presenting traditional Chinese hand puppetry; the Karagiozis Greek Shadow Theater, a part of the Greek Cultural Center in Astoria, Queens; and the Czech-American Marionette Theater, an internationally acclaimed company based in New York.

The festival also featured puppet-making workshops, where young and old were provided materials to create their own puppets.

One of the puppet-makers was 85-year-old Esther Lazarson of Manhattan.

“I come here all the time,” Lazarson said. “I love this museum. I love to do crafts so I come whenever they have a workshop.”

Rachelle Bradt, YU Museum’s curator of education, said the workshops draw a cross-section of people. “If you’re old enough to hold a scissor, we welcome you. At our last workshop, we had a woman who was more than 100 years old,” Bradt said.

The workshops proved so popular that participants waited for 15 minutes in a line that snaked out the door and down the hallway.

The festival was funded in part by the New York State Council on the Arts.