On the eve of Yom HaZikaron and Yom Ha’atzmaut, Leon Kass, philosopher and bioethicist, and Rabbi Dr. Meir Soloveichik, director of The Zahava and Moshael Straus Center for Torah and Western Thought, discussed memory, patriotism, Israel and meaning in an animated dialogue at Congregation Shearith Israel.

In his latest book, Leading a Worthy Life: Finding Meaning in Modern Times, Dr. Kass explores topics ranging from courtship to intimacy, human dignity, physician-assisted suicide, eugenics, liberal education, patriotism, and religion. Dr. Kass, a longtime professor of political philosophy at the University of Chicago and the Madden-Jewett Scholar at the American Enterprise Institute, runs the gamut of Western civilization.

Rabbi Soloveichik and Dr. Kass began with the topic of memory, specifically as it relates to the commandment to honor our parents. “One of the most striking things that you write in the chapter on the Ten Commandments is that the obligation to honor one’s father and mother is a radical innovation of the Torah,” Rabbi Soloveichik said. “How is this so?” Dr. Kass explained that this commandment was an innovation in two respects: “To place the mother in equal standing with the father is absolutely novel in the ancient world,” he said. “Second, other cultures give the greatest honor to the heroes, warriors, athletes, statesmen and poets, while the Jews, in contrast, choose to honor our own fathers and mothers.”

This commandment comes on the heels of the commandment to remember the Shabbat — remembering God’s creation of the world, which was hallowed on the seventh day. “Each week we are called to remember creation, and to imitate our creator,” he says. “In the same way, we are enjoined to remember our own particular creators, whom we owe a special debt of gratitude for the gift of life and nurture.” 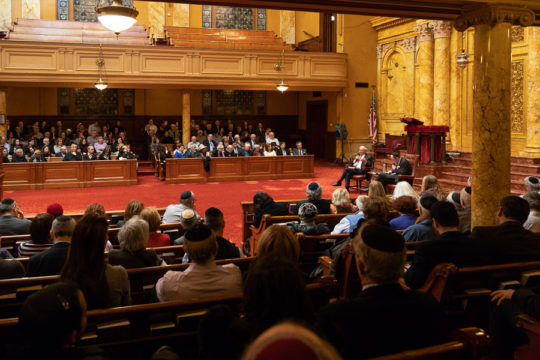 Rabbi Soloveichik asked about friendship, a strong virtue in Greek philosophy and for Aristotle in particular, wondering how it compares to the Jewish perception of friendship. “The Bible is relatively stingy on friendships and strong on marital love and parenthood,” Dr. Kass said. This is largely due to the differences in culture: “The Greeks celebrate maleness and gaining a name for yourself by prowess in this world, versus a way of life the core of which is to carry out the covenant made by Abraham to your children from generation after generation,” Dr. Kass said. “Friendship belongs to a world of male dominance where male-male relationships are primary.” Indeed, noted Rabbi Soloveichik, at eight days old, with the ceremony of circumcision, Jews are already envisioning a child getting married.

Moving on to the state of America, Dr. Kass and Rabbi Soloveichik discussed the Gettysburg Address. In it, as Dr. Kass sees it, Abraham Lincoln affirms the Declaration of Independence but calls for a different kind of freedom, which is directly related to his overarching mission “to create for future generations an interpretation of war” that affirms the dignity of life and the principle that “all men are created equal.” He argued that “Lincoln has transformed a merely intellectual truth, held as self-evident and accessible to universal human reason (the Declaration’s formulation), into a truth requiring practical demonstration by particular people — our fathers — who dedicated themselves to doing so.” That is, Lincoln’s transformation of American politics was at its core not political at all. It was ethical, grounded in a recognition of inherent human dignity. The words of the Declaration are only the beginning, a reminder that our moral work is never finished.

Dr. Kass described spending Yom HaZikaron and Yom HaAtzmaut in Israel with his children and grandchildren. He was moved by a visit to a new memorial for fallen soldiers in Kfar Etzion, which was filled with dramatic reenactments, pictures and letters. “There’s no place in America where you can feel so immediately what this means for those still living Israelis, to feel so connected to people who sacrificed their lives here.” Reviewing the Israeli Declaration of Independence with his granddaughter, he said, he felt “in awe of the document. It’s something quite remarkable to be able to see what, on the threshold of independence, people connected with their history and how they set forth the values they want to live by.” 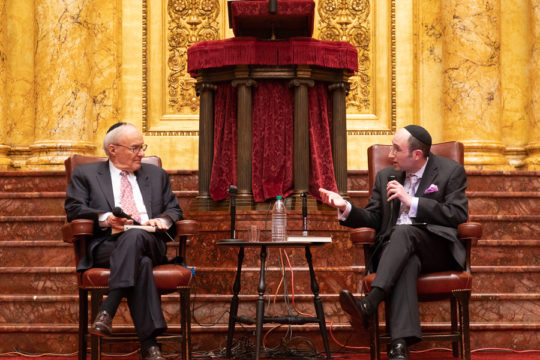 Finally, Dr. Kass compared Israeli and American students. The Israelis, he said, have a “seriousness of life,” while Americans “work forever to trace the fundamental questions,” he said. “There’s cynicism everywhere and irony is applied to everything, to anything people hold dear.”

But beneath the cynicism, students still possess an age-old desire for a place in the world that makes sense, “a pursuit of truth rather than lying to yourself all the time, a place in community and a connection with the spiritual and the divine.” How to access this? According to Dr. Kass, through the radical idea that moral relativism is a lie, and that much can be learned from old books. “These books,” he said, “can teach us something important to help us lead a meaningful life.”