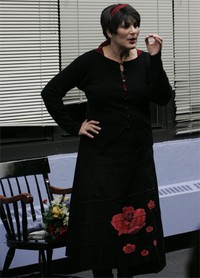 More than 80 young men attended the play and the question and answer session that follwed at the Rubin Shul on the Wilf Campus. A similar program was held on the Beren Campus for female students last year.

“We wanted to get the message out there that domestic violence does occur in the Jewish community and that it should not be brushed under the carpet,” said Dr. Victor Schwartz, University Dean of Students.

In the show, Michal, a young woman from an upper-middle-class family, describes how her partner gradually narrows her world, isolating her from her friends and family. Members of the audience see her denial, guilt, and how social conditioning intensifies her shame and despair. They witness Michal sink into darkness and then watch her take charge of her life.

Ms. Ackerman created the monologue from true stories and actual incidents shared by women willing to talk about their all-too-common experiences. The show has been performed more than 800 times in Israel, Australia, and other venues around the world.