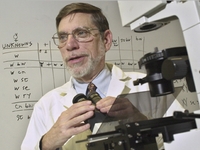 Nov 11, 2003 — Almost a half century ago, C.P. Snow delivered his famous “Two Cultures” lecture lamenting the void between scientific and literary intellectuals. A similar case could have been made for scientists and theologians, two cultures that had been growing apart since at least the Renaissance.

Today, however, it appears this gap is shrinking. A small but growing number of academicians are forging new links between science and religion in the belief that answers to many questions lay in neither culture but in a combination of the two.

One of these scholars is Carl Feit, PhD, who holds the Dr. Joseph and Rachel Ades Chair in Health Sciences at Yeshiva College. “It has become academically acceptable to look at both science and religion,” says Dr. Feit, an ordained rabbi. A biologist who received his bachelor’s degree at YC, he has been waiting a lifetime for these two cultures to begin a serious dialogue.

“For the majority of my academic career,” he says, “my two interests had to reside separately. If you wanted to be taken seriously as a scientist, you couldn’t talk about religion.”

But things have changed. “From Newton in the 1600s to the 20th century, we thought that science would always progress and would eventually answer all the questions about the world,” says Dr. Feit. “That assumption has certainly been brought into question by modern physics. For example, if the Big Bang (simultaneous appearance of space everywhere in the universe) model applies, then you can provide a new context for a discussion of a created universe. Topics like this have become a legitimate area of thought for scientists.”

Part of his genetic makeup

To Dr. Feit, these topics were always legitimate intellectual pursuits. Brooklyn-born, he grew up in a household that prized learning. At a young age, Dr. Feit found a calling in both science and rel

“For the majority of my academic career, …if you wanted to be taken seriously as a scientist, you couldn’t talk about religion.”

“When I was five years old, I would steal the afikomen [the matzah eaten at the end of the Seder meal on Passover] and then ask for a microscope or a chemistry set. My heroes were people who made contributions that changed humanity, largely in medicine. My earliest memories are of sitting in my father’s lap, looking at the books he was studying and learning the letters of the Hebrew alphabet. And so both the world of Jewish learning and the world of science are part of my genetic makeup; they have always co-existed.”

The two cultures rarely rubbed shoulders in the outside world, however.
After studying at Yeshiva College, and Yale University Dr. Feit enrolled in a doctoral program in microbiology and immunology at Rutgers University in 1967. Science, for the time being, was his top priority, but religion wasn’t far behind. “I made time for learning every day,” he says.

Perhaps too much time, in the eyes of one high-profile faculty member, who questioned Dr. Feit’s commitment to science when he applied for a postdoctoral fellowship.

This came as a shock to the budding scientist. Science, to him, was ultimately a means to understanding himself, the human organism, and the world in general. Religion also played an integral part in that quest, and it made no sense to him to abandon one for the other.

Inwardly, he clung to both cultures. But professionally, he was all science. In 1975, Dr. Feit went to work for the Sloan-Kettering Institute for Cancer Research, earning a stellar reputation for studies of monoclonal antibodies and human tumor antigens. A decade later, he returned to YU as an associate professor of biology, the rare refuge for academics with feet in both science and theology.

The wall begins to crumble

Over the years, the wall dividing the two cultures began to crumble and erode, and science began to lose its veneer of infallibility. “Certainly after WWII, with the trauma of the atomic bomb, the idea that there is something value-free and neutral about science went out the window,” says Dr. Feit.

Finally, as the 20th century ended, outsiders were invited into the ivory towers, and Dr. Feit found himself in demand at scientific meetings and symposia, not for his expertise on cancer immunology but for his religious perspective on ethical issues in science, such as cloning and stem cell research.

For several years, Dr. Feit has been involved with Science and the Spiritual Quest, a program of the Center for Theology and the Natural Sciences at the University of California, Berkeley, that promotes dialogue among leading scientists on the connections between their scientific pursuits and their religious or spiritual practices.

And in 2002, he helped found a new learned society, the International Society of Science and Religion, a think-tank for scientists with a religious bent, including several Nobel laureates and National Academy of Science members.

“It is very important that there be a rational Jewish voice as part of public policy discussions,” says Dr. Feit. “We have a long and ongoing history of analytic and profound thought on the interface of science — or at least technology — and religion. It tends to be in a technical and insular language — rabbinic Hebrew — for our own community. But a lot of what we say is of universal interest.

“And one of the things I can do is to take this world of rabbinic scholarship and put it into modern and contemporary parlance — not as a way of telling everybody what is right and wrong, but of exposing them to thoughts and ideas and pros and cons that are not out there in the literature. I see myself as an ambassador to the world at large who is interested in science and religion.”