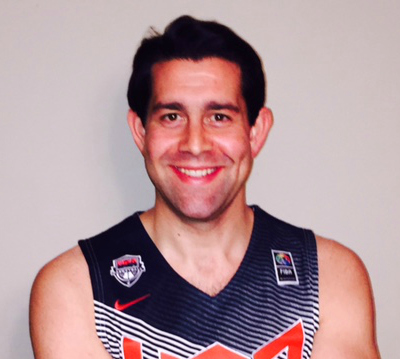 It’s no surprise that attorney Josh Kahane ‘01YC has been selected as one of 10 players on the 2015 USA National Basketball Team who will compete in the 13th Pan American Maccabi Games in Chile this winter: the sport has been an important part of his story since high school, even playing a role in his decision to attend Yeshiva University’s Yeshiva College in 1997.

Kahane remembers the moment well. In his senior year of high school playing for Memphis’ Cooper Yeshiva, he broke both the single game and overall tournament scoring records at the Red Sarachek Tournament and was named a Most Valued Player. “That weekend my father, who had come up for the event, and I spent a lot of time visiting with Coach Halpert about YU and the team and Coach Halpert was very effective in persuading me to come to YU.”

After spending a year in Israel and arriving at YU as a sophomore, Kahane felt that academics needed to be his top priority and that it was critical for him to ensure he had sufficient time for his classwork in both secular and Judaic studies. So Kahane decided not to play for the Macs—“a difficult decision,” he admitted. But it was the right move for Kahane as he focused on his double majors in political science and sociology and began to plan his future career.

“The YU undergraduate program, through its dual foci and curriculum, provided the foundational building blocks for my academic and then professional success. The overall YU experience helped me gain the values and passion necessary to live a committed, dedicated and meaningful Jewish life,” said Kahane. “Dr. Ruth Bevan was especially influential in my academic journey—not only was I impressed by her scholarship, but she was a wonderful resource and sounding board for me as I planned my post-YU future. She guided me on summer positions, internships, and my applications for law and business school.”

He added, “It was Dr. Bevan who pushed me to apply for the highly competitive White House Internship despite the fact that a YU student had never before been selected. I was awarded a spot in the internship which turned out to be one of the most rewarding experiences of my life.”

Another influence on Kahane’s YU career: his wife, Elana, whom he married in his junior year. The couple lived in Washington Heights as he finished his degree and frequently spent Shabbat together in the YU cafeteria. “Five hundred guys, one lady – it was quite a scene,” laughed Kahane.

After graduating from YU, he earned degrees at Temple University’s School of Law and the University of Pennsylvania’s Wharton School of Business before heading to Memphis, Tennessee to begin his law career. “We wanted to settle in a vibrant and warm Jewish community where we could make a difference and contribute as leaders,” said Kahane. “Memphis was a perfect fit.”

There, Kahane took a job with a large corporate law firm and in 2011 moved his practice to Glankler Brown PLLC, one of the oldest and most distinguished firms in the state. Kahane is an equity partner in Glankler’s litigation practice group. As his professional life flourishes, Kahane has also furthered his passion for the Jewish community and YU: he serves on the Board of Overseers of the University’s Azrieli Graduate School of Jewish Education and Administration, in addition to those of several local Jewish organizations and agencies.

“In my opinion, YU is the most critical piece to ensuring a vibrant and capable Jewish future,” said Kahane. “It is YU graduates who dedicate their adult lives to the causes of the larger Jewish community and who, because of the education, skills, and training they gained as students, are able to balance the challenges of successful professions with a commitment to meaningful and influential Jewish lives. Both because of sincere hakarat hatov [gratitude] to the institution that has been a facilitator for my own personal success and also, practically, because a strong and secure YU means a strong and secure Jewish future for my children and grandchildren, I have become actively involved in YU leadership at the highest levels.”

Why specifically Azrieli? “Because Azrieli’s programs train the next generation of Jewish teachers, educators, and thinkers. It is they who will ensure that our children have the wherewithal necessary to overcome the challenges the 21st-century will present and it is our Azraeli graduates who will prepare future generations to not only exist but excel in our ever-changing global community,” said Kahane. “I believe strongly that YU must become an even greater priority for every Jewish family. Now must be the time that we as a national Jewish community invest in YU by sending our children, contributing of our wealth, and working as ambassadors on behalf of the institution in our respective cities and communities.”

Between a busy law practice and an engaged life as a Jewish communal leader and family man—Kahane and his wife have four children—you might think basketball had fallen by the wayside. But Kahane’s love of the game is still going strong: in 2007, he founded the Cooper Yeshiva High School National Invitational Basketball Tournament, which brings 16 of the top Jewish high school basketball teams from across North America to Memphis each year for a five-day event, and he has organized the gathering each year since.

As for his upcoming trip to Chile at the end of December, Kahane can’t wait to compete against other elite Jewish athletes from around the world. “Representing the United States against top-level athletes from across the globe makes this event exciting, but competing at this highest level within an environment that encourages Jewish pride and strengthens Jewish bonds makes it a truly unique opportunity,” he said.