What can the Egyptian exhibit at the Metropolitan Museum of Art teach us about the Jewish people’s exodus from Egypt? Quite a bit, according to Rabbi Dr. Meir Soloveichik, director of the Zahava and Moshael Straus Center for Torah and Western Thought.

On Jan. 8, 2020, Dr. Soloveichik delivered “From Mitzrayim to Manhattan: What the Egyptian Exhibit at the Metropolitan Museum of Art Teaches Us about the Exodus” at Congregation Shearith Israel, often called the Spanish and Portuguese Synagogue. The lecture celebrated the launch of Koren Publishers Jerusalem’s latest release, The Susan and Roger Hertog edition of the Tanakh of the Land of Israel.

With the release of Sefer Shemot, this new series is designed to synthesize the extraordinary findings of modern scholars on the ancient Near East with the original Hebrew text. The book features a new English translation of the biblical text by Rabbi Lord Jonathan Sacks and contextualizes the biblical narrative, laws, events and prophecies within their historical milieu. Each volume in the series will feature stunning visuals of ancient civilizations, including artifacts, archeological excavations, inscriptions and maps, plus brief articles on geography, biblical botany, language, geography, halacha [Jewish law] and more.

With this revolutionary work of scholarship in mind, Dr. Soloveichik spoke about the profound inner meaning of the Exodus from Egypt and the plagues that accompanied it. According to him, the political aspects of the Exodus reflected in the freeing of the ancient Israelites was bound up with the theology of the Exodus. Each plague brought down on the Egyptians was intentional, designed not only to punish them but to fundamentally undo their entire religious worldview. It was not enough for the Israelites to simply be freed from Egyptian slavery. They needed to be freed from the Egyptian ways of life in which they had been trapped during their servitude.

Through focusing on the matzah as symbolizing the Exodus and the iconography of Egyptian hieroglyphics in both the Met and the Tanakh of the Land of Israel, Dr. Soloveichik demonstrated how the Torah was not only invested in bringing Israel out of Egypt but with bringing Egypt out of them, thus allowing the people of Israel to reclaim their own national identity. It is this national reclamation that the book of Exodus, and this exciting new commentary on it, celebrates. 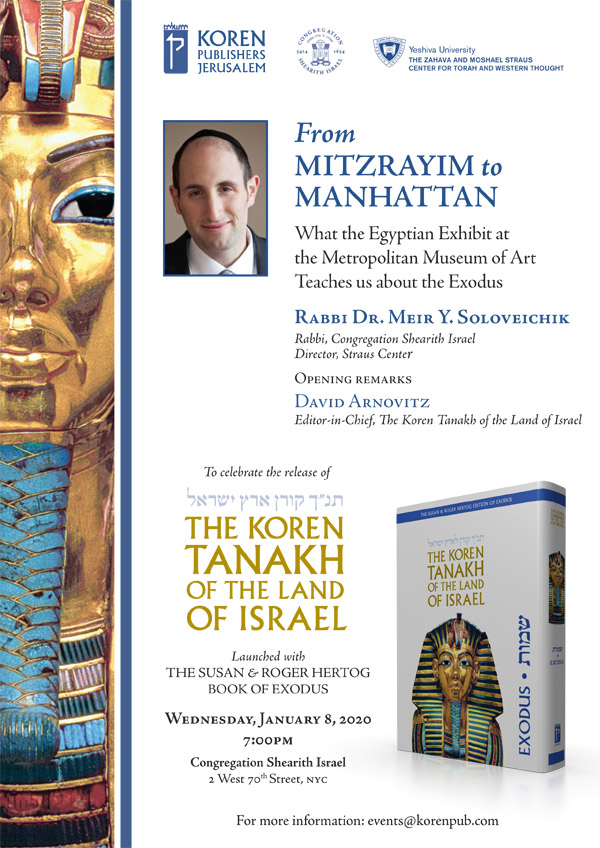