On the evening of October 19, 2021, the YU Innovation Lab held its first in-person event for the fall 2021 semester, “From the Modern Battlefield to the Startup World,” featuring Roy Peled, managing partner at Ballista Ventures, a New York City-based business accelerator for Israeli startups offering innovative security and life-saving technologies for the North American market.

In a fascinating and fast-moving presentation, the veteran of the Israel Defense Forces (IDF) discussed the unexpected direction his career took from counterintelligence operative to technology entrepreneur. Sharing lessons learned with an audience of more than 50 students, Peled recounted how a willingness to take risks, grounded in military discipline, along with the ability to adapt his skills to new environments, opened the way to his current role at Ballista Ventures.

In 2001, during the Second Intifada, Peled enlisted in Duvdevan, the IDF’s undercover counterterrorism unit. Participating in some of the unit’s most complex and dangerous operations, he eventually led the development of several covert field communication technologies, still in use today.

After his honorable discharge, Peled joined the Israeli equivalent of the U.S. Secret Service, serving in high-profile security operations in the Prime Minister’s office. But when his exemplary career in the military and government came to a close, Peled was at a turning point. How could he use his specialized skills to transition successfully to the private sector? 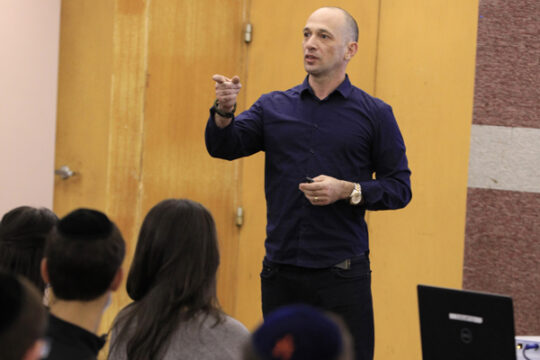 After the United States, Israel is the second-largest creator of technology startups, per capita, and, by extension, its military serves as a unique incubator for burgeoning entrepreneurs. As Peled noted, “The years I spent in counterintelligence and in government security were a great training ground for my future. I gained the confidence to take on bigger challenges because I had developed a powerful skill set: leadership, the ability to innovate and problem solve, and an understanding of new and emerging technologies.” That skill set was a perfect fit for startup culture, where entrepreneurs like Peled are working to change the world.

For Nava Katz ’22S, “Hearing Roy Peled speak was inspiring and informative because it made me realize how transitioning careers can be possible when you are willing to take a chance and apply your skills to new fields.”

Grant Goldberg, assistant director of the YU Innovation Lab, commented that Peled’s message of resilience and risk-taking is one that will continue to resonate with the audience, comprised of soon-to-be YU graduates. “The event was incredibly helpful because it showcased someone who, despite being at a crossroads, could leverage skills and experience to create a new future. Many college students are about to face a similar challenge as they finish their degrees, and I’m sure Peled’s journey offers a good example of how to tackle that moment when it comes.”

Editor’s Note: Among the Lab’s many sources of support, Yeshiva University would like to acknowledge the help of New York State Sen. Todd Kaminsky for his grant in 2019 to help establish the Lab and the U.S. Economic Development Administration’s $1.4 million Economic Adjustment Assistance grant in 2020 that provides technical assistance to Israeli firms seeking to locate in New York City.