From the Dean’s Desk

Going from Strength to Strength

This week’s Torah portion begins with Aharon, the Kohen Gadol, lighting the newly-inaugurated menora in the Mishkan. The Torah uses an interesting word for it, one that becomes so central that it’s the name of this week’s parsha: Instead of the usual word for “lighting” (“lehadlik”) the Torah uses “b’haalotcha”: “When you rise up.”

This has echoes of a puzzling question in Psalms (24:3): “Who will ascend the mountain of Hashem, and who will rise up in His place of Holiness?” Once we have ascended the mountain, why do we have to continue rising upwards?

This question embodies the Jewish value of going m’chayil el chayil: from strength to greater strength. In life, we must continually grow our capabilities and impact rather than resting on our laurels, happy with what we have accomplished. At each milestone, we should pause to celebrate but then strive to build further. Most centrally, we need to build a strong foundation while we are in school and then to further build on that foundation in order to continue climbing.

This month, we marked two major milestones for our students who are going m’chayil el chayil: The Gala Awards Dinner and Graduation 2021.

On May 3, 2021, the Sy Syms Gala Award Dinner was held at Keter Torah in Teaneck.  The dinner was in-person, following all appropriate guidelines to ensure health and safety. Michael Strauss, associate dean, was the master of ceremonies.

Here is the list of the award winners for the Academic awards, Service and Character awards, and Dean’s Hakarat Hatov awards for Service and Leadership. Awardees also included professors of the year and adjunct professor of the year, based on a student vote conducted by the student councils. 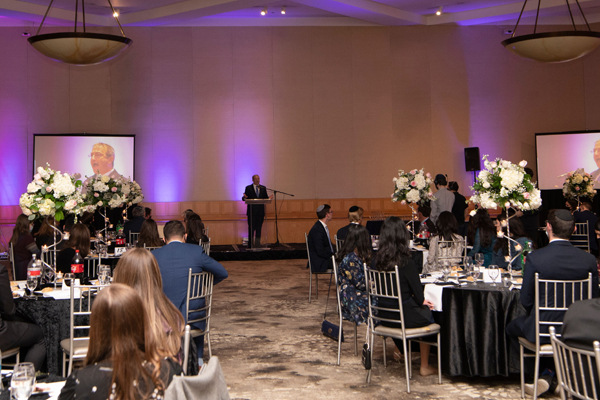 From the administration, the dinner featured President Rabbi Dr. Ari Berman’s speech about the mission of the school and Dean Dr. Noam Wasserman’s siyum on Masechet Bava Batra (in memory of Donny Morris a”h and for a refuah sheleimah for two Sy Syms parents and two students) that emphasized the importance of preparing well while building a foundation for life.

The distinguished speaker was Steve Lipman, a global partner at investment bank Rothschild who is dedicated to Jewish education and other communal causes. He was introduced by Marcy Syms, a central figure on the Sy Syms Board of Overseers. Lipman talked about reaching your potential in life while managing the tradeoffs that you inevitably will face. 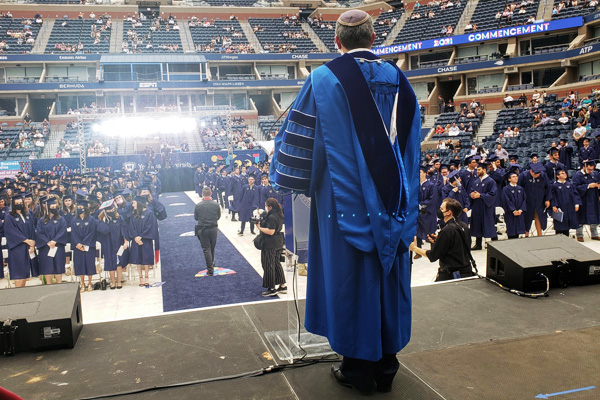 The Israeli and American national anthems were sung by international recording star Shulem Lemmer, who also provided musical entertainment during breaks in the ceremony.  His final song sparked Chanukah Concert-like spirit – singing and dancing – among the students and administration.

I personally had the honor of presenting to Rabbi Berman this year’s 228 amazing and resilient new graduates of Sy Syms who are fully prepared to excel as Torah-grounded professionals in the workplace and in the community, and welcomed them to their new status as YU alumni.Please join me in wishing them mazel tov and hatzlacha raba as they transition from being students to being alumni and as they go m’chayil el chayil with their next stages of life!