In a pre-Shavuot event in a packed auditorium at the Yeshiva University Museum, Rabbi Dr. Meir Soloveichik, director of the Zahava and Moshael Straus Center for Torah and Western Thought, and John Podhoretz, editor of Commentary, explored the depiction of Moses on film — and what those depictions say about our times and our culture.

The program began with a clip from the most iconic of Bible films: Cecil B. DeMille’s Ten Commandments, made in 1956. The film’s special effects might seem laughable to today’s filmgoers, yet it remains larger than life, earnest in its portrayal of the Exodus, and full of cultural, social and moral themes. In a clip of DeMille introducing the film to contemporary theater audiences, he called the Exodus story the “birth of freedom,” noting the timeliness of the question: “…whether man should be ruled by God, or by a dictator … are they the property of the state, or are they free souls, under God?” This battle, DeMille says, continues throughout the world.

DeMille — a religious Christian whose mother was born Jewish — was his era’s Steven Spielberg, the founder of the “large-scale, ponderous, no-expenses-spared movies,” said Podhoretz, who is also a film critic for The Weekly Standard and a columnist for The New York Post. Starring Charlton Heston and featuring one of the largest sets ever created for a film, The Ten Commandments was, at the time, the most expensive movie ever made. It was also a uniquely American story, Podhoretz said, part of a craze of Bible movies that reflected the cultural themes of post-World War II, 1950s middle America, a time when more Americans went to church than ever before (or since). DeMille was a staunch anti-communist, and his reference to man being “ruled by God or dictators” is a not-so-subtle reference to the “Godless communists.” Communism was on everyone’s mind, discussed in church and on Meet the Press. At the same time, the civil rights movement was in full swing — the Montgomery bus boycott happened in 1955-56 — and DeMille, in his references to slavery, was loudly proclaiming a pro-civil rights message.

DeMille worked hard to create an accurate representation of the Exodus, from costumes to dialogue, and even filmed it on location in Egypt, Mount Sinai and the Sinai Peninsula. (Rabbi Soloveichik noted that after DeMille finished the film he gave the tablets to Mount Sinai Hospital in Los Angeles, “so for a time, the Ten Commandments actually sat on top of Mount Sinai.”) And while DeMille does get some of the facts and timing of the story wrong, he accurately portrays a midrash that says God would speak to Moses in the voice of “his father.” With Charlton Heston as the voice of God in the burning bush, DeMille correctly depicts the idea that while Moses was raised with the Egyptians, his primary identity lay with the Hebrews, his real family. “That is the central drama of the story,” Rabbi Soloveichik said.

Sociologically, the 1950s was a time when Jews began to dominate popular culture, and when there began to emerge a “national philosemitism” that connected the American story with the Jewish story of finding a homeland. The irony, noted Rabbi Soloveichik, is that it took a religious Christian to tell the story of the Jews — while many American Jews were uncomfortable with public Jewishness.

Many find the film campy, but it can be spellbinding, Podhoretz said. This is partly because its dialogue, which is based on the Bible, solves the problem that all period films have, of sounding anachronistic. “People have a hunger and a love for films that take us out of our own head,” Podhoretz said. “Even the unplaceable accent of Yul Brenner [who stars as Pharaoh] has the effect of making us wonder, ‘Where are we?’”

Some 40 years later in 1998, three secular Jews, David Geffen, Jeffrey Katzenberg and Steven Spielberg of DreamWorks, produced the animated musical Prince of Egypt. With a voice cast that includes Val Kilmer as both Moses and God — “the only guy less Jewish than Charlton Heston,” joked Rabbi Soloveichik — the clip features a tortured Moses, full of pain and regret as he watches the plagues pummeling the Egyptians. “It’s a perfect snapshot of the American Jewish mindset,” Podhoretz noted. “We’ve found paradise in America, and now we have the luxury to say, it wasn’t nice how we were saved.” In contrast, the pre-mid-20th century Jews, having survived very recent persecution, would have had no trouble celebrating God’s destruction of Egypt. “The notion that there would be deep regret is absurd,” Podhoretz said. 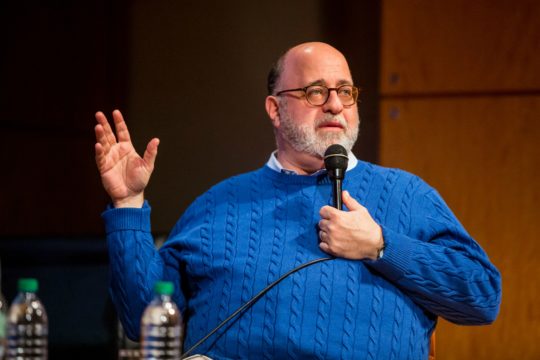 Fast forward to 2014, when Ridley Scott, renowned for films like Alien, Blade Runner and Gladiator, directed Exodus: Gods and Kings. A colossal flop that was panned by critics, it was, Podhoretz said, “a $200 million movie made in reaction to Mel Gibson’s successful and anti-Semitic Passion of the Christ.” We see a clip of Moses, submerged in mud with only his face poking above the muck (“which comes from where in the Chumash?”), talking to God, portrayed as a petulant 11-year-old boy. Podhoretz described a later scene in which Aaron watches Moses speaking with the little boy/God, but Aaron sees only Moses speaking to himself — implying that the divine revelations in the Exodus story are delusions. “It’s an explicitly atheistic Moses as a psychotic lunatic thinking God is an 11-year-old boy,” Podhoretz said. “It’s a reverse mirror and a bizarro-world image of the DeMille movie.”

Sadly, Podhoretz noted, Scott could have successfully brought the ancient era to life, as he did with Gladiator. “But the bottom line is that movies reflect their times, and there is no studio that would make a pious movie about Moses in 2014,” he said. “DeMille was a pious man, and that can’t be faked. DeMille’s movie was a movie of its time, and this is also a movie of its time. DeMille, for all his camp, was authentically insightful.”