Expanding the Boundaries of Kosher Cooking 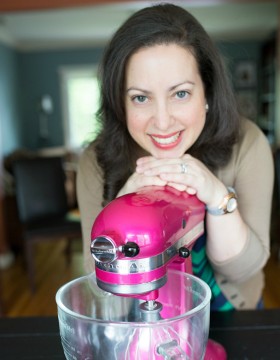 Melinda Strauss ’06S is the culinary whirlwind behind Kitchen Tested, where she promotes her mission of “expanding the boundaries of kosher cooking” with great joy and energy.  The site offers hundreds of recipes and food tips as well as complete menus, all designed with step-by-step directions and photos so that anyone “can just follow along and get it right every time.”

She is also Director of the Kosher Food Bloggers Conference, an annual conference in New York City for professionals in the kosher food industry, and recently become a health coach for Take Shape For Life.  Juggling Kitchen Tested with her other work responsibilities as well as parenting two active children, Zachary and Nora, has “been incredible but definitely time consuming.”  (She readily gives a shout-out to her husband, Justin, who she describes as a “great husband and helpful father [who] washes the dishes and does the laundry!  I couldn’t ask for anything more.”)

Melinda came to Stern College in 2001 from Seattle, Washington, and graduated in 2006 with a degree in public relations; she also took classes at Sy Syms School of Business and in the art department.  (She still has a painting hanging in her house from her favorite art class.)  She chose to come to YU because, in a manner of speaking, YU chose her.  Her mother and father are YU alumni as are all her siblings, and “it was in my blood.”

In her first year here, she had two things happen to her that significantly affected the course of her life.  The first, of course, was the tragedy of 9/11.  “I always considered NYC my campus,” she said, and the assault upon her “campus” deeply touched her.

The second was being diagnosed with Type 1 diabetes, which helped influence her eventual choice to manage food as her life’s work.  “Living in the Windsor Court dorms with my own kitchen,” she said, “definitely pushed me to start playing around with food.”  Her freshman year, she said with understatement, “was definitely a doozy.”

On balance, though, she has positive memories of Stern College.  “I spent four years making incredible friends that I am still close with today, and I am so appreciative of that.”

Upon graduating from Stern, Melinda received a call from Goldman Sachs to work as a recruiter in Human Resources for their technology department. She felt it was an opportunity she couldn’t refuse and fell in love with recruiting and building relationships.

However, when her second baby, Nora, was born, Melinda decided to be a stay-at-home-mom, and because Nora was such a good napper, she had a lot of time on her hands.  She found herself “cooking tons of crazy recipes and posting them on Facebook.”  Her friends suggested she turn them into a blog, which is how Kitchen Tested came into being.  “I guess the rest is history!”

In some ways, she was predestined to go this route.  Along with having to pay attention to the way nutrition affected her diabetes, “I also grew up in a family of food lovers,” she said. “I used to watch my Savtah [grandmother] make homemade ice cream, and now my father is doing the same thing.”

There is no way to practice Judaism religiously or culturally without food, a fact neatly, if ironically, captured by the old joke, “They tried to kill us, we won, now let’s eat.”  Melinda’s work of “expanding the boundaries of kosher cooking” comes out of this rich culinary heritage and shows the astonishing  array of vocations YU alumni have taken up as they share with the rest of the world what a YU education gave them.