Yael Eisenberg ’18S on a Mission to Discover and Invent 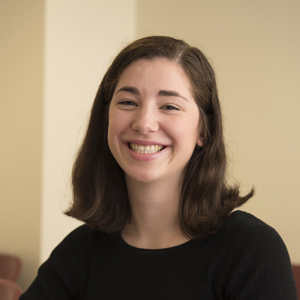 Yael Eisenberg ’19S is a dedicated mathematician and researcher who is currently a Launch Vehicle Control Study Intern at National Aeronautics and Space Administration’s (NASA) Kennedy Space Center in Florida.

Her current work at NASA is grounded in the expert and meticulous instruction she received from the mathematics and computer science departments at Stern College for Women as well as the monetary support she received from the Bertha Kressel Research Scholarship, established in 2008 by Dr. Henry Kressel, which supported an intensive research project at Bar-Ilan University under the direct supervision of YU faculty.

As a junior at Stern College, she joined the combined BA/MA program in mathematics, which allows advanced undergraduate students to take graduate courses that can count towards both the BA and MA. In 2018, she received her BA in Mathematics; she will receive an MA in Applied Mathematics in 2019 upon completion of her thesis.

“The Stern College math department is comprised of strong and dedicated professors who go out of their way to ensure their students’ success,” said Eisenberg. “Their willingness to tailor the program to the needs of each student, along with their advocacy on behalf of the students—whether this means helping them to network, exposing them to available opportunities to enrich their educational experiences, and/or enabling them take advantage of these opportunities—exceeds any expectation I might have had of my instructors. I will always be grateful to my professors for their contribution to my intellectual and educational growth.”

Their efforts on her behalf, she pointed out, included such things as connecting her to professors at other institutions, taking groups of students to solve coding challenges at hackathons where they also met like-minded students from other universities and, perhaps most importantly, getting her involved in leading-edge research projects.

For example, in the summer of 2017, she was part of a summer research program sponsored by Yeshiva University and Bar-Ilan University in Israel under the supervision of Dr. Mina Teicher, who currently is teaching a math graduate course at YU. She worked in Bar-Ilan’s state-of-the-art Gonda Multidisciplinary Brain Research Center. Her project involved mathematically analyzing brain waves recorded via magnetoencephalography, a non-invasive device which investigates brain activity by recording the magnetic fields produced by the electric currents in the brain.

“I never expected that being a math major could take me into neuroscience research,” Eisenberg said, “which was a new science for me.” The research involved inspecting how different areas of the brain were stimulated when numbers were presented in different manners, such as circles and beeps along with regular numbers. “If the data show that that different areas of the brain are used to understand the same data when it’s presented in different ways, that information can empower people who are ‘stronger’ in one area of the brain or who have brain damage in a specific area of the brain to utilize their strength to solve problems they previously thought were beyond their capacity.”

Her research experiences have proven to be both professionally and personally satisfying. “My research has the potential to have an important impact on our lives. I derive great satisfaction from applying math to science and using my skills as a math student to better explain the mysteries of the world, from optimizing our human brains here on earth to sending rockets to the moon to extending our scientific knowledge beyond this world.”

Fellows benefit from a three-year annual stipend along with an allowance for tuition and fees, opportunities for international research and professional development and the freedom to conduct their own research at any accredited U.S. institution of graduate education they choose.

“The grant will be supporting the mathematics research I will be doing in my math PhD program at Cornell, which I will begin in August,” Eisenberg explained.