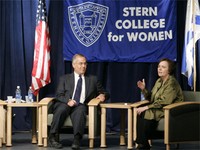 May 8, 2009 — It was as if their New York Times blog “The Conversation” came to life on stage at the Schottenstein Cultural Center when columnists David Brooks and Gail Collins met to talk about President Barack Obama’s first 100 days in office on April 27.

The incisive and wide-ranging discussion—part of the Dr. Marcia Robbins-Wilf Scholar-in-Residence Program—was moderated by Professor Bryan Daves of the Yeshiva University political science department and director of the Robbins-Wilf program.

Punctuated with wit and candid anecdotes of politicians behind the scenes, the conversation jumped from health care to the economy to foreign policy, reflecting the ambitious course of action of a president who, as Brooks put it, has “[bitten] off as much as he can chew.”

The two veteran journalists agreed that Barack Obama could very well fundamentally change the direction of policy and the nature of politics in the United States, but they diverged over their assessment of his policies.

“Obama has a tremendous chance to be a transformative president,” said Brooks, whose op-ed column in the Times began in 2003 and who regularly appears on PBS’ NewsHour with Jim Lehrer. “He has made more proposals in 98 days than most presidents do in their entire presidencies.”

Brooks cited Obama’s biggest achievement to-date as “running a competent administration,” explaining that it was not a given that the former junior senator would know how to put together a smooth-running administration. But he sounded the alarm at what he termed the president’s “off-the-charts self-confidence.”

“There is a danger of over-reach—he has taken on the auto industry, health care and a million other things,” Brooks said. “It has been a very successful 100 days—and he has done it by spending money we don’t have,” he added, emphasizing the concern expressed by many conservatives that the Obama administration’s budget plans are not sustainable in the long-term.

Collins, who was the first woman to be named editorial page editor of the Times and who now writes a twice-weekly column for the paper, took a different tack on Obama’s priorities. “Health care has become the defining goal of the first year of his term,” she said. “He has also honed in on saving the middle class and shrinking the gap between the middle and upper class.”

She disagreed with Brooks on the wisdom of tackling both the economy and health care at the same time. “Most people agree that you cannot fix the economy without fixing health care—and he doesn’t have forever to do this,” she said, referring to the view held by many in Washington that if there is to be a major push on health care, it will have to take place in Obama’s first year in office.

On the state of the Republican Party, the two shared ground. They said that after the large-scale losses in the last two election cycles, the Republican Party is trying to find its bearing, and that the election of Barack Obama may indeed portend a long-term shift for the direction of the country and in the fortunes of the two major parties.

“The idea of the free market leading the country has been supplanted by the responsible leadership class,” said Brooks. Taking what he wryly termed the “maximalist” view, Brooks said that the Republican Party in the U.S. is “three election defeats away from the kind of rebirth the British Conservative Party is experiencing,” alluding to the first possible Conservative victory in Britain since Tony Blair’s Labour Party took power in 1997. Collins said she had never seen a group of people with less of an overriding message or agenda as the Republicans.

The two journalists agreed that Obama faces daunting foreign policy challenges.. Despite the new administration’s diplomatic overtures to Iran, they saw that country’s development of nuclear weapons as inevitable. They agreed that the U.S. presence in Afghanistan would be long and that achieving American goals there would be difficult.

Collins raised the concern that a U.S. troops withdrawal would result in “the women of Afghanistan [being] thrown under the bus,” arguing that the settlement of the conflict in Afghanistan could very well result in a return of many of the restrictions on women instituted under the Taliban.

On the question of Israel, Brooks said Obama would be tougher on the issue of the settlements than previous administrations, and predicted that the two countries would diverge on their policies toward Iran.

He foresaw “not a difference in view but in salience and panic”—an opinion echoed by Collins, who noted that there was no desire on the part of Obama to do anything to offend Israel in any way. “But that’s because it is not top of [the administration’s] agenda. They will be happy to keep the status quo,” she said .

Dr. Robbins-Wilf, a founding member of the Stern College Board of Directors, established the program in 2001 to bring to the campus outstanding figures in diverse fields to benefit both students and faculty.