This week, Yeshiva University’s women’s tennis team made history as the Maccabees captured the Skyline Conference championship at the USTA National Tennis Center in New York City. With the win, the team became the first YU women’s program to earn a bid into the NCAA tournament. 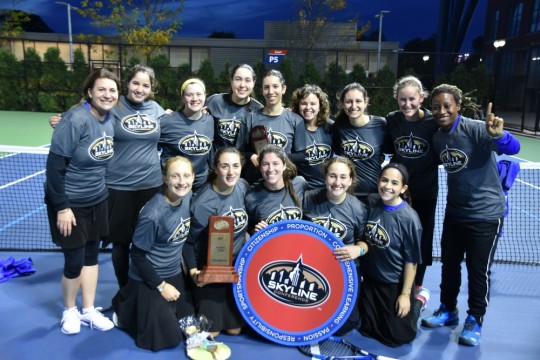 The top-seeded tennis program reached the conference championship for the first time since 1999, after completing a season in which the team went 10-1. What’s behind the Macs’ success? According to the student-athletes, it’s a combination of raw talent, rigorous training and powerful teamwork.

“We work hard,” said Shani Hava, the team’s top-ranked player, who competed in Israel before she was recruited by YU’s athletics department four years ago. “We’re like a family: we support each other, we try to help each other. My favorite team memories all happened off the court. When I first came here I didn’t know anyone and my team became my first group of friends. I spent every day with them. We’d spend the weekends together, and Shabbats; it was a quick way to make friends for life.”

Throughout her YU athletic career, Hava has won a series of accolades, including four consecutive Skyline All-Conference First Team appearances, the conference’s Rookie of the Year, and multiple conference Player of the Year and Scholar-Athlete of the Year awards. Most recently, she was named the Most Outstanding Player of the Skyline Conference championships. “It’s fun to win because we represent not just YU, but Jews in general on the court,” said Hava, who hopes to pursue a career in accounting. “My first year here when we competed, opposing players would ask me, ‘What’s a Maccabee?’ And we would talk to them about what it means to be Jewish—we wouldn’t have these conversations if I was playing for another college.”

“It’s very exciting to be the first women’s team going to the NCAA tournament– we’ve come very close in the last few years. This year we have the momentum we have and it’s such an exciting experience and such a special thing to be part of,” said Adele Lerner, another member of the team, who is studying Jewish education. “It’s huge. None of us could have done this without the others. When you have so many strong players it creates an amazing environment and you can see that by how far we’ve gone in the competition.”

Like many members of the team, Lerner has been passionate about tennis since childhood. “I like that you have to take all of the responsibility for your successes and your failures,” she said. “Your individual performance affects how you do as a team. If you have to do something yourself, like a job interview, you have to go back and evaluate what went wrong and what went right for yourself – just like life.”

However, despite her dedication to the game, it wasn’t always simple for her to play tennis competitively. “I became religious in high school through NCSY and I had to really evaluate if I could keep playing tennis in my last season of high school—it didn’t work out with Shabbat and Yom Tov, and that was such a hard thing to give up,” said Lerner. “It was amazing to come to YU and realize that I didn’t have to give up tennis anymore. Here, there are no sacrifices; I know that my coaches and team and the athletics department will always have our backs religiously, and it’s a huge privilege to compete as a religious athlete for YU.”

For Coach Naomi Kaszovitz ’87S, who returned to lead the Maccabees to the championship after successful careers on both the basketball and tennis teams during her own years at Stern College for Women, that opportunity is part of the YU experience’s unique appeal for students who also consider themselves serious athletes.

“YU reminds us every day that we can be committed religious Jews and yet fully participate in the world around us, receiving a stellar Jewish and secular education and far-reaching professional opportunities,” she said. “When we’re recruiting, I love explaining to potential applicants the unparalleled opportunity to play high-level NCAA tennis, with accommodations for our observances, while attending a Jewish, academically-challenging university. It’s a win-win.”

As coach, Kaszovitz has been deeply moved by her team’s commitment to the sport—and each other. “I am constantly inspired by my players as they juggle their rigorous course work with their athletic schedule,” she said. “I am always impressed by the instant friendships that are formed as teammates and how they work together as a cohesive unit, whether it’s giving advice to one another, sharing the responsibilities of team equipment or encouraging their teammates to be the best they can be, in class or on the court.”

“In addition to having outstanding players, especially our senior number one player, Shani Hava, who has helped us achieve playoff status each of her four years on the team, there is an unspoken bond between our student athletes of doing their best and not wanting to let each other down,” she added. “I am very pleased, along with my assistant coach, Danielle Carr, that we’ve been able to achieve this sense of teamwork.”

That sense of camaraderie extends beyond the current lineup, according to Hava. “We want to thank the team, not only this year’s team but the players and captains from past years as well, and the Athletics Department and the coaches who have supported us the whole way,” she said.

“This historic win shows that women’s athletics at YU has come of age,” said Joe Bednarsh, director of athletics. “These young women were tenacious, untiring and determined as they charged through the regular season, and the playoffs saw them step it up to another level. This championship is the culmination of years of hard work and each one of these student-athletes should be incredibly proud of what they accomplished.”

The NCAA Division III tournament will take place in May.