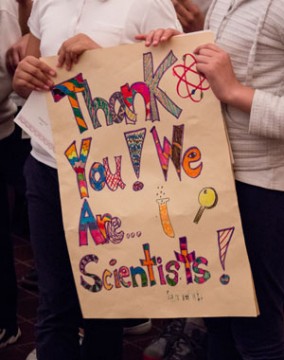 Founded in 2011 by Yeshiva University undergraduates, nonprofit organization Project START (Students, Teachers, and Researchers Teach) Science seeks to spark public school students’ excitement for scientific study by engaging them in science modules taught by college students in local schools. Last week, the program’s YU chapter held its first-ever symposium, where 150 fourth graders from P.S. 189 on Amsterdam Avenue gathered at the Weissberg Commons on the Wilf Campus to receive certificates of completion for their year-long study of the sciences, including chemistry, physics, biology and engineering.

Along with inspiring speeches from Assemblywoman Carmen De La Rosa (D-Washington Heights) and David Baily, deputy chief of staff for Congressman Adriano Espaillat (who represents the 13th District of New York), the children were also dazzled by a show put on by Mad Science, a company that specializes in making science education entertaining.

At the symposium, the students had the opportunity to meet Norman Bickoff ’71YC, a major benefactor of Project START, to whom they presented large handmade thank-you cards in appreciation for his support. Bickoff, who owns a property management service in New Jersey, believes strongly in tikkun olam [repairing the world] and giving back to the community that gave so much to him.

“When I attended my 40th reunion in 2011, I was offered the chance to support Project START, and I knew immediately that this was the program for me,” he said. “I loved my time in Washington Heights, and I wanted to make living in the community as exciting and productive as possible for the children.”

Avital Habshush ’17S and Dani Edelman ’17YC, co-presidents of START Science Yeshiva University, both became involved in the organization early in their college careers, beginning as volunteer aides to the YU students teaching the modules in the classrooms and then graduating to teaching the lessons themselves. Modules might include building roller coasters to demonstrate conversion of mechanical energy, dissecting sheep hearts to study their anatomy, building gumdrop and toothpick bridges to test mechanical strength, and constructing circuits to learn about the flow of electricity.

“I am so passionate about doing this work,” said Habshush, a biology major, “because it’s so important to get kids excited about science, especially kids who might not have the chance to study it in their schools.”

Edelman agreed, citing his own love of studying biology, chemistry and public health as the motivator that got him involved in working with the children. “Giving back is so important,” he said. “It’s a lot of fun when you’re giving back what you love to kids who are so eager to learn what you know.”

Since its creation by Yair Saperstein ’13YC ’16E and Ari Cuperfain ’13YC six years ago, Project START has established national chapters at YU and Albert Einstein College of Medicine as well as international chapters in Canada and Zimbabwe and Pre-START, a program where high school students teach science modules to preschoolers.