The Yeshiva University Athletics Department has launched the Blue & White Club, the booster club for the YU Maccabees. Supporters from around the world can now partner with Yeshiva in effort to help maintain the unique experience of our student athletes. All contributions to the club will be used to advance the long-term programmatic goals of the athletics department, and every dollar of each donation directly affects the students. 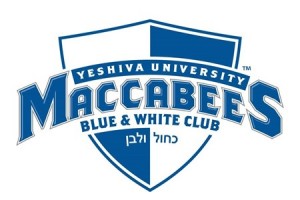 According to Director of Athletics Joe Bednarsh the idea of a booster club has been percolating for many years. “It was one of my goals when I took the reins of the program,” said Bednarsh. “I want to thank Vice President Josh Joseph and all of the departments, offices and administrators who helped make this initiative a reality.”

Shlomo Weissberg, this year’s captain of legendary coach Halpert’s basketball team, credited Yeshiva University for giving “me the opportunity to accomplish everything I have ever dreamed of. I learn Torah in the mornings, take my college classes in the afternoons, and come into the gym to play NCAA basketball at night. The Athletics Department and the basketball team have allowed me to have the experience of a lifetime, I genuinely believe contributing to the booster club is a way to ensure future students can benefit from Yeshiva University the way I have.”

The Athletics Department has started an awareness campaign to let supporters know about the Blue & White Club. The logo is similar to one of our other marks and features the words ‘blue and white’ in Hebrew. In addition to being the colors of the Israeli flag and of the Yeshiva Maccabees, the Hebrew phrase ‘blue and white’ is also the name of a well-known patriotic Israeli song.

“Yeshiva University is the only place in the world where an athlete can be a fully observant Orthodox Jew and compete in the NCAA,” said Jack Stztrigler, men’s soccer team captain. “In order to compete with the best, we need to perform like the best.  Every dollar helps make our Yeshiva student athlete experience better. Yeshiva already competes with the best of the best in almost every other discipline, and now every donation to the booster club enhances Yeshiva’s ability to compete on the field as well.”

“Playing NCAA soccer at Stern College was an extremely unique and rewarding experience,” said Sara Shamir, women’s soccer team captain. “Playing an NCAA sport made my time at Stern even more worthwhile, and it set apart Yeshiva University from any other Jewish college experience; continued financial support is integral for the continuation of this once in a lifetime experience.”

Learn more or make a donation at www.yumacs.com/giving.