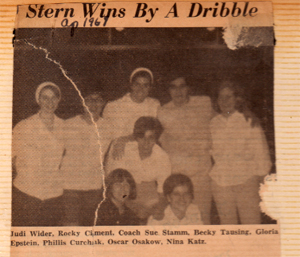 had been in existence for more than 10 years when a group of its students noticed something was lacking: a women’s basketball team.

This didn’t sit very well with Phyllis (Curchack) Kornspan ’69S, an athletic student from West Hempstead, Long Island, who had played basketball during high school. “I said, ‘Let’s organize our own basketball team.’ The women were very interested.”

There were a few obstacles to overcome, namely no gym, no coach and no uniforms. In the beginning of the fall semester in 1966, the Julia Richmond Community Center on 68th Street offered the team an opportunity to use the court from October to May for $3 per girl. The price entitled each player to membership in the community center and the use of its facilities. One of the center’s employees, Billy Martin, volunteered to coach the women and organize the team. “It was an exciting time; there was finally a Stern College for Women basketball team” says Phyllis, who served as captain of the team.

Yonina (Katz) Langer ’71S joined the team in 1968 and promptly went up to Washington Heights to request funding from Rabbi Avraham Avrech, then director of the Community Service Division and director of Alumni Affairs at Yeshiva University. 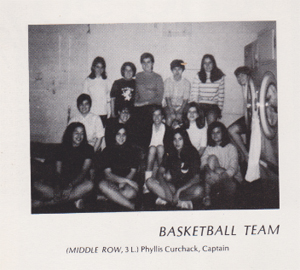 “We needed our own coach if we were going to be serious about what we were doing. We needed uniforms … or at least Stern basketball shirts. And, of course, we needed basketballs,” says Yonina, who became team captain upon Phyllis’s graduation. Rabbi Avrech was quite athletic himself and, although only 5 foot 4 inches, he played on the YU basketball team in the late 1930s.) “Rabbi Avrech was very responsive and we got everything we needed.” It was a slam dunk.

In 1968, Sue Stamm, a physical education instructor at Hunter College, came on board as coach. The women were presented with the opportunity to play against another school, the Hunter College Junior Varsity Women’s Team, instead of against one another. In 1969, the team played against the Lehman College team.

“Sue was very professional and really helped us develop as players and as a team,” recalls Yonina.

The passion for the sport and the camaraderie of the team are what stand out most in the minds of the former players. “We came together around something that we all loved to do: play ball,” says Yonina, who was raised in Brookline, Massachusetts, and now resides in Riverdale, New York. “I learned strong leadership skills, how to advocate for a group and how to be part of a team. It was a wonderful experience.”

“The average height of our team was 5 foot 4 inches tall, Hunter’s average was 5 foot 7 inches,” describes the 4-foot-11-inch Susan (Osokow) Weiss ’69S, who was known to her teammates as “Oscar.” The Hunter and Lehman women came to the court with several advantages: all were phys ed majors, practiced at least three hours a day and towered above our team members. “We lost the games but our goal was to have a good time and to keep moving. And that we did,” says Susan, a Philadelphia native who now lives in Brookline, Massachusetts. She continued to play after college, even tossing some hoops the night before her first child was born.

The women share fond memories of the team-faculty games. In 1967, faculty members included Dean Isaac, Prof. Ross, Miss Tauber, Mrs. Cook and Mrs. Slomowitz. The next year, Dean Auerbach, Mrs. Orlian and Miss Slomowitz together scored one point (the other 13 points were scored by a Hunter College student kind enough to lend her talents). The faculty were certainly good sports, challenging the team to a rematch.

Now living in Petach Tikvah, Israel, Phyllis looks back on those days with affection. “We wanted to start a team, and we did. I applaud the current women’s team. But I remember: We did it first!”