From all 50 states to the Colorado State House, Rep. Dafna Michaelson Jenet Finds Inspiration in the Journey 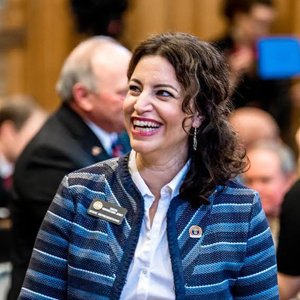 When Rep. Dafna (Kalish) Michaelson Jenet ’95S, who represents House District 30 in the Colorado State Legislature, wants to find proven solutions to big problems, she doesn’t sit home and wait for ideas; she gets out there and finds them. That’s what inspired the Denver resident to visit all 50 states—one each week for 52 weeks in 2009—to hear about what real people were doing to solve community problems.

Following the grand tour, she and her husband, Michael Jenet, co-founded the Journey Institute, where they work with schools, businesses, organizations and individuals to train in community problem solving to build sustainable solutions. Her 50 in 52 Journey was the catalyst for her book, It Takes A Little Crazy to Make a Difference, which won an International Book Award in the social change category and set her off on another big adventure: the Colorado State House.

“CBS Sunday Morning did a nine-minute segment on my travels, and we weren’t really prepared for all of the publicity and interest that followed,” Michaelson Jenet recalls. She wrote a blog detailing her conversations and was interviewed by writer Maya Angelou, who called her a “kindred spirit.”

But in May 2010, she found a lump in her breast, and all opportunities were temporarily put on hold as she underwent a bilateral mastectomy.

A few years later, while working on It Takes a Little Crazy, she ran into a local politician who encouraged her to run for office. Running as a Democrat, she was elected to her seat in 2016, unseating the Republican incumbent with an 8% margin.

Many of Michaelson Jenet’s legislative efforts are informed by her own experiences, such as a bill requiring health insurance for breast imaging. She points to support for struggling youth and suicide prevention as her number one focus. Suffering from a severe learning disability and unable to get appropriate support at school, her son, Eytan, now 17, attempted to commit suicide at the age of nine. She takes this phone interview from a school conference where, she says, “we’re trying to figure out how to make sure not one more child dies from suicide.”

One solution is House Bill 19-1017 (Kindergarten Through Fifth Grade Social and Emotional Health Act), a bill Michaelson Jenet sponsored and which was passed into law. It created a pilot program to place one behavioral health professional—such as a social worker or counselor—in each grade from kindergarten through fifth grade, in all schools participating in the program.

Born in Tel Aviv, Michaelson Jenet moved to the United States as a child. “My parents, who had made aliyah, met in Ulpan,” she states. “It was hard to survive, and they moved back when I was young.”

While she attended yeshiva in elementary and middle school, there was no girls yeshiva in Cincinnati, Ohio, where she lived, so she attended public school. Her mother, Margie Strick (now Malkah Karas) ’71S, spoke fondly of her years at Stern College for Women and Michaelson Jenet was eager to return to Jewish studies. “Toward the end of public school, I decided that Stern was the right path for me.”

The sense of community she found there continues to follow her. “I was at the gym in Colorado, wearing my Stern sweatpants,” she recalls with a laugh. “A fellow alum came up to me and invited us for yontif [Jewish holiday]. There’s always a community.”

As a legislator and a woman working toward tikkun olam [repairing the world], Michaelson Jenet looks to Judaism for inspiration and guidance, which have informed her work and the way she lives her life.

“I live by the value that I won’t complain about a situation unless I’m willing to be part of the solution,” Michaelson Jenet explains. Hers is the story of a woman willing to go the extra mile to find an answer.