Their backgrounds and life experiences couldn’t be more different. One, a former public school cheerleader, is newly returned from fighting on the front lines of Gaza as a soldier in the Israeli Defense Forces; another is acing her second year as a finance major at the Sy Syms School of Business after battling cancer as a freshman; another, a recent convert, is a junior at Stern College for Women and has many courses in advanced Judaic studies under her belt. But as students in YU’s Mechina Pathways Basic Jewish Studies Program, they all share one thing: a passion to learn more about Judaism, connect to their heritage and grow as people.

The two-year program, a track within the Rebecca Ivry Department of Jewish Studies at Stern, is designed for women who are new to Hebrew language and textual study, grounding them in both the practical and spiritual framework of Judaism through stimulating and intellectually challenging courses, weekly chavrutas [learning partnerships] with other students and inspirational shabbatons with teachers, mentors and community leaders. But the program is more than just an academic group: it’s a meeting-place where students from around the globe and every walk of life come together as they embark on the journey of a lifetime, forming deep, lasting friendships and connections as they do.

“We wanted to create a community of learners who are at a similar stage of their journey through Jewish knowledge and identity,” said Schechter, the program’s director. “Our goal is that by the time they’ve completed the program, they have the confidence to take classes at any level of Judaic studies they choose here at YU.”

More than 250 women have participated in the Mechina Program over its 12-year history; with alumni and current students hailing from as nearby as New Jersey and as far away as Tahiti, Colombia and the Ukraine, Schechter jokes that the only continent that hasn’t been represented in the Mechina Program is Antarctica. “What’s important is that the community isn’t tied to the classroom—it continues beyond and after their academic studies, creating lifelong bonds between the students themselves as well as with their teachers,” she said. “Each student in the program has chosen to be here, and that choice often meant taking the road less traveled for these women. The passion and excitement they bring to their engagement with Jewish studies is what has really made this program thrive.” 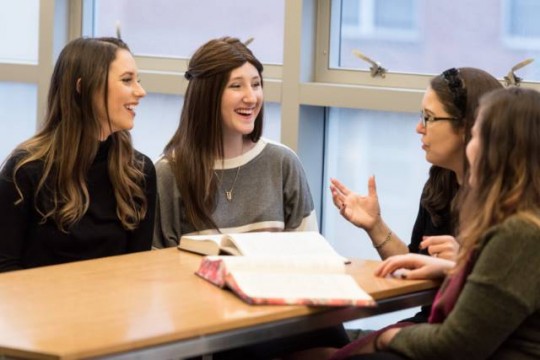 “I love the shabbatons that the Mechina Program runs—everyone is just like me, not necessarily coming from an observant background, and it’s really beautiful that all of us at our different levels are rising spiritually together,” said Whitney Kagan, a sophomore at Sy Syms. “The other students in the Program are in many of my classes with me and they make up the friends I talk to on a regular basis. Mrs. Schechter and Rabbi Lawrence Hajioff, the Mechina Program’s rabbi, really understand where we come from and they want us to learn and grow—it’s really special to have that feeling from a teacher.”

Though she attended Sunday school and synagogue services a few times a month and on High Holidays growing up, Kagan didn’t have much connection to Judaism until she became involved with the National Conference for Synagogue Youth (NCSY) as a teenager: “It opened me up to learning which I had never been exposed to before,” she said. “Many of my advisers went to Stern and they played a big role in influencing me to come here.”

Kagan surprised herself by applying to and then attending YU, a university across the country from her Portland, Oregon, home where she knew no one. But she enjoyed diving into academic and extracurricular life as a student in the Mechina Program and a participant in the annual dance show put on by the Stern College Dramatic Society—until she began to suspect something was wrong.

“I had a cold pretty much all of winter—I usually get sick once or twice but this just never went away,” Kagan recalled. “I was involved in the Stern dance show and I really wanted to get better. It got to the point that I couldn’t walk a flight of stairs without getting out of breath.”

After a visit to the ER and 11 days in the intensive care unit at New York-Presbyterian Columbia University Medical Center, she was diagnosed with lymphoma. “During that time so many of my friends from the Mechina Program visited me daily,” said Kagan. “Everyone was bringing me food for Pesach in case I had to spend it in the hospital. Mrs. Schechter came to visit me in the hospital and my friends brought me notes from class. Everyone was so supportive.”

Kagan continued to Skype into classes and complete her coursework even as she underwent treatment, going on to ace all seven courses she took that semester. Her friends and teachers in the Mechina Program were behind her every step of the way. “They were all so understanding but no one treated me differently,” Kagan said. “I would have been lost without a program like this. It’s helped me form strong friendships and succeed in my courses while I grow my Jewish knowledge.”

For Hodaya Card, an alumna of the program who is thriving in her own studies and now mentors other new students, that’s exactly what she hopes students come away with. “It’s an academic program that helps people who didn’t grow up in the yeshiva day school environment acclimate to yeshiva-style learning very quickly, within in a year,” Card said. “It enables you to go on to advanced Judaic studies classes. It creates a foundation for your entire life, no matter what you decide to go into, by setting you up with people who believe in you and trust your judgment, people who stand beside you and rally around you to make sure you’re always supported and moving in a positive direction, whatever that means for you.” 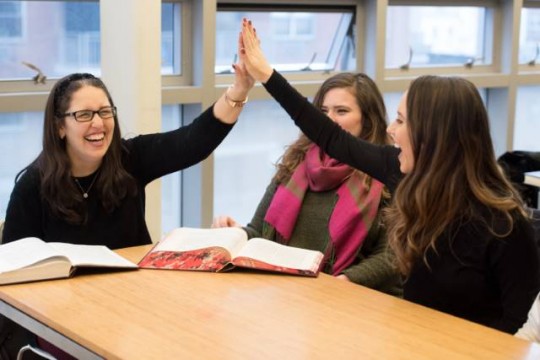 Like many students in the Mechina Program, the Franklin, New Jersey native never expected to find herself immersed in Torah study at YU. As a convert to Judaism, fascination with YUTorah.org—an online vault of Torah lectures and talks on every topic under the sun that is run by YU’s Center for the Jewish Future—led her to Stern College. “I thought, if I’m going to live an Orthodox lifestyle I might as well do it at the epicenter of modern Orthodoxy,” said Card. “Going to YU has set me up for life in terms of connections.”

She found the connections she made in the Mechina Program especially meaningful. “The program enables you to find common ground between yourself and people from very different backgrounds,” said Card. “As long as you’re willing to look a little beyond yourself, you’re going to find something indescribable that connects you to the next Jew.”

A memorable example: The time last year when Card, who had been visiting Israel and was going to be late for her plane back to the United States after missing a bus, called a secular Israeli soldier she had known from Mechina and asked for a ride. “She picked me up, I even got to meet her family, and then she drove me to the airport,” said Card. “I think moments like that capture what’s so special about this program.”

Like Kagan, Card was also deeply touched by the support and constant mentorship of the Mechina Program’s staff. “Rabbi Hajioff is the primary rabbi in the Mechina Program, and he’s very pressed for time, but no matter how busy he was, I’d text him at random times and time zones over the last three years with questions or thoughts and I’d always get a response within a few hours,” she said.

For Kayla Mogil, a freshman in the Mechina Program and IDF veteran from Seattle, Washington, the decision to attend Stern wasn’t an easy one. She was passionate about Israel, but had had little exposure to Orthodox Judaism and wasn’t sure what that would mean for her education here. “I was incredibly nervous about fitting in when I first applied to Stern—I had no idea that the Mechina Program even existed,” Mogil said. “Being a part of it has really shown me that it doesn’t matter what your religious background is, there is a place for you and teachers here that will be patient and work with you no matter what level you are on.”

Now, a few months into her studies, the program has helped Mogil to feel more at home as she explores the nuances of her Jewish identity in detail. “I didn’t realize how much more I’d be getting out of my college experience,” she said. “I couldn’t be any happier or more excited to learn about Judaism and my roots. The most important thing I’ve learned so far is that there isn’t just one type of Jew. Being here, at a Jewish university, I’ve learned that no matter who you are, there is a place for you.”

For Kagan, the most important takeaway of the program is its emphasis on fellowship. She recalled the message of a dvar Torah that moved her at a recent shabbaton: “You can’t take on the world by yourself,” she said. “You need a friend to grow with and bounce ideas off of, and if you can grow that friend to a group of friends, you’re set for life.”