The family of Leonard Grunstein, a respected figure in the New York City real estate community, dedicated a Sefer Torah to Yeshiva University in memory of his father, Morris Grunstein a”h. The gift was celebrated in an all-day ceremony on December 7, featuring a traditional march through the streets with family, university administration, and students of the school. The Torah will be used for services at the university.

“Leonard Grunstein has always been a valued member of the Yeshiva University community, and we are humbled by the generosity he has shown to our school,” said President Richard M. Joel. “Their family’s kindness is truly a model for Yeshiva University’s students.”

After a class presented by Rabbi Yaakov Neuberger, RIETS Rosh Yeshiva, students and family had the chance to fill in the final letters of the Torah.

The Torah was then carried under a chuppah [canopy] through the streets surrounding YU’s Wilf campus, accompanied by singing and dancing. 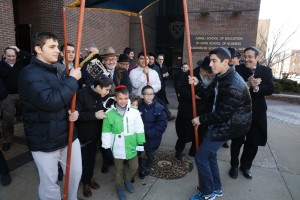 Leonard Grunstein and his wife Chanie, as well as their three children, are all alumni of Yeshiva University. A long-time supporter of the school, Grunstein was named a member of the Board of Overseers of the Bernard Revel Graduate School of Jewish Studies in early 2013. He has been involved with an array of other Jewish causes such as the Hebron Fund and the YIVO Institute.