Yeshiva University’s University’s Alumni Office will be celebrating the 40-year career of men’s basketball Coach Jonathan Halpert ’62YUHS, ’66YC, ’78F with a court-naming ceremony in his honor on May 6, 2012 at the Max Stern Athletic Center on YU’s Wilf Campus in Manhattan. The event will include the unveiling of Halpert’s signature on the men’s basketball court as well as the launch of the Coach Jonathan Halpert Scholarship Fund, an endowment that will be awarded annually to children of YU alumni living in Israel wishing to study at the University. 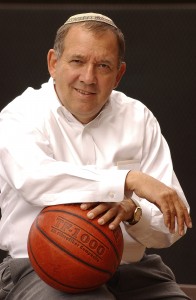 Halpert, who took over the YU Maccabees roster in 1972, is the longest tenured men’s basketball coach in New York City history.  He was named coach of the year in the NCAA’s Skyline Conference twice, and at one point compiled a streak of 15 consecutive winning seasons.  Above all, Halpert has served as a role model for core Jewish values to three generations of Yeshiva University students.

“For four decades, Coach Halpert has imbued the Melvin J. Furst Gymnasium with the values of sportsmanship, teamwork and Jewish pride,” said President Richard M. Joel. “With this deserving honor, Coach Halpert’s example and leadership will inform the play and actions of the future scholar athletes of Yeshiva University for generations to come.”

Over the last 30 years, Halpert has visited Israel twice a year to recruit Israeli talent interested in representing Yeshiva University on the court while receiving a top-notch Torah and academic college education. The Coach Jonathan Halpert Scholarship Fund was established under his guidance to benefit YU alumni who have immigrated to Israel.

“When I heard that YU wanted to mark this milestone in my tenure, I insisted that the celebration include the establishment of the scholarship fund,” said Halpert. “This grant is an expression of gratitude to Yeshiva University alumni who have made Aliyah and my way of ensuring that Israel’s future leaders obtain the tools they need to continue to build the Jewish State.”

Individuals interested in honoring Halpert’s significant contributions to YU and the Maccabees can contribute from anywhere in the world via the University website. Donors to the Coach Jonathan Halpert Scholarship Fund will be recognized in the interactive display documenting the history of the Maccabees in the Max Stern Athletic Center and in an honorary book to be presented to Halpert later this year.