How should women balance family life with professional aspirations?

It’s a discussion that resonates with many women today, but began long before they may realize. That’s what Dr. Rachel Mesch, associate professor of French and chair of the Languages, Literatures and Cultures Department at Yeshiva College, found when she discovered that conversation already taking place in women’s magazines in early 20th century France while following up a lead for another research project. Intrigued by the magazines’ mix of demure, feminine aesthetics with forward-thinking literary content, Mesch had to learn more.

That research eventually culminated in her new book, Having it All in the Belle Epoque: How French Women’s Magazines Invented the Modern Woman (Stanford University Press, July 2013), the subject of the latest Humanities in Dialogue Faculty Book Series conversation on October 10. The series brings together members of the faculties of Yeshiva College and Stern College for Women to discuss a recent publication in the form of a dialogue between the book’s author and a colleague from another discipline.

Dr. Marnin Young, assistant professor of art history at Stern College, interviewed Mesch about her work, bringing his expertise in the art and culture of the time to the discussion. “This is a book about two French magazines, Femina and La Vie Heureuse, and the construction of a new image of women,” Young said, noting that Mesch had called that image “belle époque literary feminism” in her book to distinguish it from other forms of feminism which had arrived in France around the same time: the suffragette movement and the harder-line femme nouvelle. Mesch shared with Young how the magazines had led her to a different kind of French woman—the femme moderne, who attempted to temper a new understanding of women’s role in society with classic femininity.

“I came across these magazines and found images of women writers I had studied closely, but they looked completely different here,” Mesch said. “I had written about these women but never encountered this kind of evidence of what they meant to the reading public. In that moment my whole approach to literary study, which had been based on close reading of novels in an interdisciplinary context, but not necessarily in terms of mass culture, shifted.”

The interview also touched on the history of photography, mass press and graphic design as Mesch demonstrated how visual elements of these magazines were calibrated to reinforce their own unique brand of feminism, never referred to as such and distinct from feminist publications like the popular La Fronde, an all-women’s newspaper. For the women who comprised the magazines’ audiences, the focus instead was on how women could enjoy expanded roles in society while excelling in their traditional roles in the home.

“For me, part of what makes the project so exciting is that it raises a lot of questions we’re still trying to figure out today,” said Mesch, juxtaposing a late 19th-century caricature that depicts a female writer hard at work on a composition while her baby plays in dirty bathwater with a recent ad in which Tina Fey crouches under her desk with a pen and paper while her child plays on her computer. “I read this progression as saying that while we may not have figured it out yet, at least now we can laugh about it and make visible the difficulty of maintaining that balance, because in American society we don’t need to have the same kind of impeccable appearance that these women did.”

The series also featured an event titled “Memoirs in the Academy,” in which English faculty from both campuses discussed their memoirs. 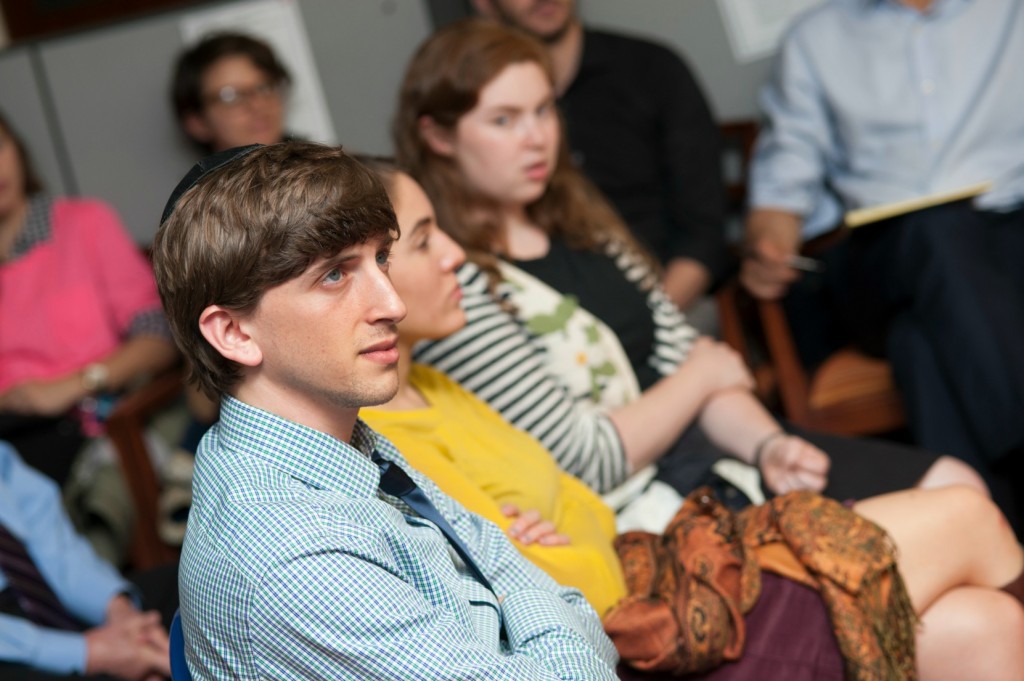 “It’s a relaxed atmosphere that allows colleagues and students to really get a sense of the process of research in the humanities, in particular fields and circumstances,” said Mesch.

“I find that the Humanities in Dialogue events are a great way to broaden your intellectual horizons in a really short period of time,” said Daniel Schoenfeld ’13YC. “These kinds of conversations between faculty are important because there are very few fields that are able to thrive in complete isolation. These events ensure that the different disciplines interact with each other, which ultimately enriches the collective academic experience of faculty members and students.”

In November, the series will continue with an interview of Dr. Gillian Steinberg, associate professor of English and director of writing at Yeshiva College, about her new book Thomas Hardy: The Poems (Analysing Texts) (Palgrave Macmillan, 2013).