Heartfelt Ceremony Brings Together Friends and Family to Commemorate This Milestone

On Wednesday, May 8, 2019, friends and colleagues gathered to celebrate the long and productive teaching career of Dr. Mitchell Orlian. His family also attended, including his wife Ethel Orlian, the associate dean of Stern College for Women, who in 2012 was awarded the Presidential Medallion for her five decades of work for Yeshiva University, and their children and grandchildren.

Dr. Orlian began teaching in the Isaac Breuer College of Hebraic Studies (IBC) in 1960, where he has offered courses on the poetry of the Bible, the prophets, Biblical exegesis and research methods, to name just a few of the many subjects he has covered.

In 1974, in addition to teaching at IBC, he joined the faculty of Yeshiva College as associate professor of Hebrew and Bible.

The people gathered to honor him spoke with great affection and respect for his long service to Yeshiva University and the many ways he guided and influenced the lives of those around him. In his opening remarks, Dr. Aaron Koller, associate professor of Bible and chair of the Robert M. Beren Department of Jewish Studies at Yeshiva College, noted that it was a “singular privilege to come together and honor Dr. Orlian, who seems to have been able to integrate the many dichotomies of his career and profession into one holistic Jewish life,” an assertion with which the audience readily agreed. 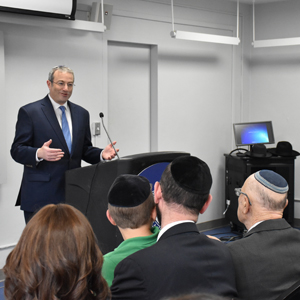 Many administration officials spoke about their respect and admiration for Dr. Orlian. Dr. Ari Berman, President of Yeshiva University, noted that “what Dr. Orlian has done is well known, not only by his students but also by everyone in this University who has been affected by his presence as a role model and by his teaching.” He also spoke about the esteem he felt for the Orlian family, “the generations upon generations of Orlians who have grown up to become leaders acting as a force-multiplier for the betterment of our community.”

Dr. Selma Botman, provost and vice president of academic affairs, in noting Dr. Orlian’s many accomplishments, said that “it was safe to say that his teaching has been deeply inspirational to generations of YU students. We thank you for your deep learning and your commitment to biblical studies and our students. You have enriched Yeshiva University in enormous ways.”

Dr. Karen Bacon, the Mordecai D. Katz and Dr. Monique C. Katz Dean of Undergraduate Faculty of Arts and Sciences, lauded the way he showed his students that whatever they studied “was not just about principles and laws and rules but also about being in love with the subject itself, whether it was the sound of the Hebrew language or the intricacies of the Bible.” She also called him “a man of chesed [charity] for the many things he did for others, unobtrusively and without any fanfare. He is an upright man, a generous man, an honorable man, a giving man, a loving man: he’s everything one could ever want for inspiration.”

Allen Schwartz, instructor of Jewish studies and Raymond J. Greenwald Chair in Jewish Studies, praised him for his “profound legacy of dedication, of love and commitment, and a life consecrated to deep study.” He also told stories about Dr. Orlian’s prowess on the basketball court and his expert leadership of the library at Camp Morasha, all of which brought laughter from the many people in the audience who had attended the camp and seen Dr. Orlian’s b-ball abilities in action.

Rabbi Mordechai Willig, Rosh Yeshiva, lecturer in Talmud and Rabbi Dr. Sol Roth Chair in Talmud and Contemporary Halakhah, whose family is very close to the Orlian family, also spoke about the athletic skills of Dr. Orlian on Friday afternoons in camp when those who spent time studying came up to mix it up on the court, “and everyone found him as scrupulous on the court as he was in his study of the Torah.”

Three Orlian sons—Uri, Moshe and Etan—also added words of admiration and affection for their parents, noting their great good fortune at having the father and mother they have and their thanks to Yeshiva University for offering their parents the opportunity to spend together over a century in service to furthering the legacy of Torah learning.

Ethel Orlian spoke about how complete her life felt while surrounded by her wonderful family, “but what has helped make it even more complete is the relationship with Yeshiva University—all of these wonderful human beings who have been such a memorable part of our lives. It is a day for remembering all the wonderful years shared with all of you who have made our lives complete.”

Rabbi Dr. Shalom Holtz, associate dean of academic affairs at Yeshiva College, presented Dr. Orlian with a commemorative plaque that read “In honor of our colleague Dr. Mitchell Orlian, with respect and appreciation, for his many years and contributions in teaching the Hebrew Bible and the Hebrew language.”

Dr. Orlian ended the ceremonies by giving his great thanks to everyone who attended and who, throughout his 60 years at the institution, which he noted “is a long time,” have helped him and his family achieve happiness, purpose and fulfillment.