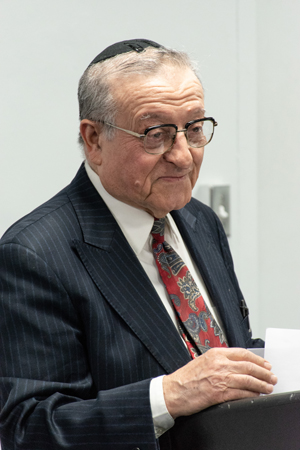 Compliments about Dr. Schneider’s pedagogical and scholarly abilities came one right after the other from the distinguished roster of speakers. Dr. Aaron Koller, associate professor of Bible and chair of the Robert M. Beren Department of Jewish Studies of Yeshiva College, led off the ceremony by stating how Dr. Schneider has been “instrumental in thinking about the instruction of Hebrew in the Diaspora,” while Dr. Selma Botman, provost and vice president for academic affairs, praised how Dr. Schneider’s teaching and scholarship brought out “the beautiful complexity of Hebrew literature.”

Dr. David Berger, dean of the Bernard Revel Graduate School of Jewish Studies, noted how Dr. Schneider “exemplifies the ideal of the Yeshiva College professor: impressive academic expertise in his own field, extraordinary familiarity with a wide array of aligned fields and an exemplary devotion to the people of Israel and its historic fate.” Rabbi Dr. Yosef Kalinsky, the newly appointed dean of the undergraduate Torah studies program and a former student of Dr. Schneider’s, described how he brought to his teaching “a unique blend of someone from pre-war Europe and a strong Zionist who was also a linguist and an academic as well as a person with a cheerful disposition and an overall positive spirit.”

As a way of honoring the teacher who had honored so many by his own teaching, Dr. Wendy Zierler ’88S, Sigmund Falk Professor of Modern Jewish Literature and Feminist Studies at Hebrew Union College-Jewish Institute of Religion, gave an evocative and insightful lecture in both Hebrew and English titled “Holy! Holy! Holy: Secular Hebrew Poetry and the Gendered Reimagining of Isaiah 6 and the Kedushah.” In the lecture, she compared a poem by H.N. Bialik (“Fleetingly Over My Face”) and one by Yokheved Bat Miriam from her poem cycle “Merahok,” both of which use Isaiah 6 as their source material but treat the lessons of that chapter very differently based what Dr. Zieler called a “gendered reimagining.”

Dr. Shalom Holtz, associate dean of academic affairs at Yeshiva College, and Dr. Fred Sugarman, associate dean of operations and student affairs, along with Dr. Ari Berman, President of  Yeshiva University, presented Dr. Schneider with a plaque commemorating his achievements. In speaking about his admiration for Dr. Schneider, Dr. Berman noted that “one of the great miracles that we’ve experienced today is the revitalization and return of the Hebrew language, where Hebrew is alive, and one of the great miracles of Yeshiva College is Dr. Schneider, who has elevated the lives of thousands of students. You are one of our great blessings, and we are thankful for all of your incredible years at the University.” 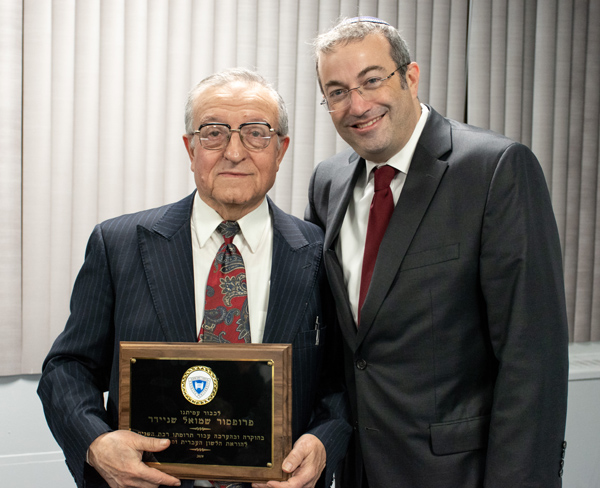 Dr. Schneider concluded his remarks with words that have guided him through his decades as a teacher, writer and counselor: “Can you be a lawyer and write a contract without mastering English? Can you become a doctor without biology and biochemistry? Can you be an engineer without calculus? Can you master the Jewish texts without Hebrew? It is impossible. Hebrew is the basis of all Jewish study.”