World War I ended officially on the 11th hour of the 11th day of the 11th month of 1918. A year later, on Nov. 11, 1919, President Woodrow Wilson issued a message to his fellow citizens on what was then known as Armistice Day (which became Veterans Day in 1954), saying that Americans should be “filled with solemn pride in the heroism of those who died in the country’s service.”

Throughout its history, Yeshiva University has had an active presence of American veterans on campus. For example, after World War II, according the pages of the Commentator, the University supported the Yeshiva Veterans Organization, which was active in many areas of campus life (ranging from favoring a decimal system for cataloguing library books to fighting racial injustice and advocating for increased G.I. Bill benefits), and hired faculty in 1946 who were also veterans to serve the “influx of veterans as students in Yeshiva College.” 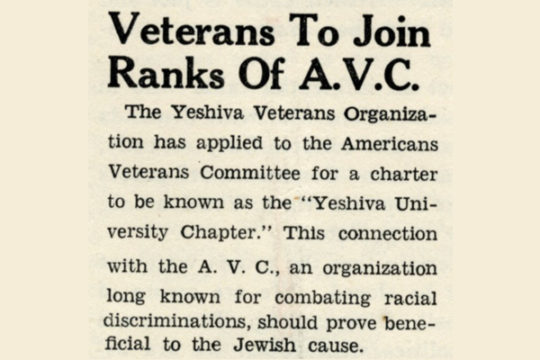 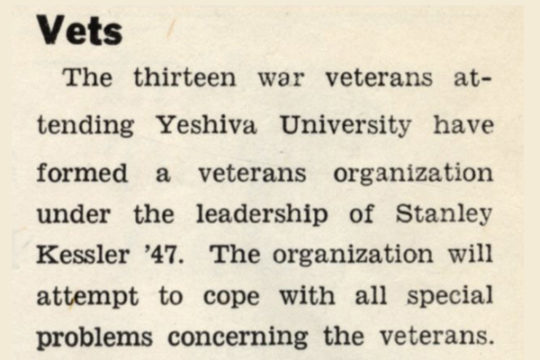 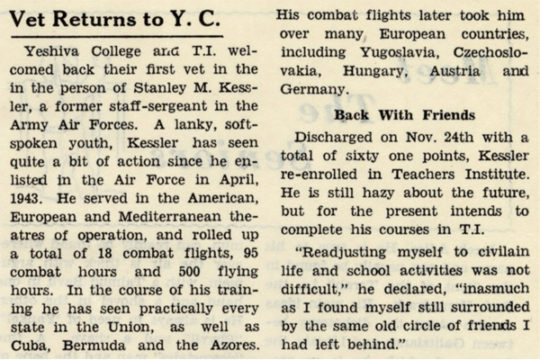 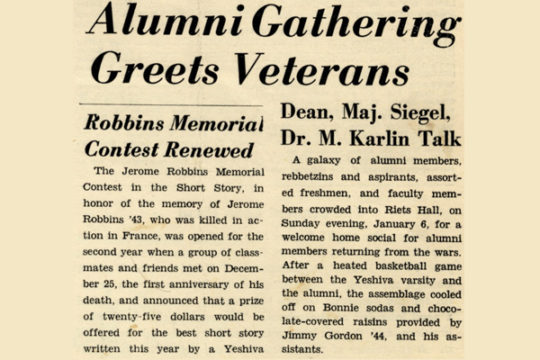 The Yeshiva University Archives also contains materials related to veterans. It possesses a small collection of letters written by Yeshiva College alumnus and a musmach from the Rabbi Isaac Elchanan Theological Seminary Louis Werfel, the only Orthodox chaplain killed in action in World War II. Known as “The Flying Rabbi” because of his frequent flights to visit servicemen in locations throughout North Africa, Chaplain Werfel perished when the plane he was traveling in while returning from conducting a Hanukkah service in Casablanca crashed in the Algerian mountains.

It also has a program for an event held on the first Thanksgiving after the end of World War II to give thanks for the Allied victory, the “First Annual Thanksgiving Service of the United Congregations of Philadelphia.” The featured speaker was Chaplain Herschel Schacter ’38YC, ’41R, Captain in the United States Army and the first Jewish chaplain to enter the Buchenwald concentration camp after advancing through Germany with the American infantry. (His son is Rabbi Dr. Jacob J. Schacter, University Professor of Jewish History and Jewish Thought and Senior Scholar at the Center for the Jewish Future.)

Today, Yeshiva University continues to serve its veterans, especially through the Wurzweiler School of Social Work. Dr. Katherine Mitchell coordinates the military social work certificate in the Master of Social Work (MSW) program. “New York state has the second highest percentage of veteran residents in the United States,” she points out, “but only 2% of health care workers in New York State meet all the criteria to be prepared to serve veterans, military personnel and their families, according to a 2018 study by the Rand Corporation. Wurzweiler is dedicated to changing this through its Certificate in Military Social Work, because social workers play a vital role in helping veterans access mental health and other services both through the Veterans Administration and the new Mission Act, which allows veterans to use civilian community-based providers at no cost to them.”

Along with the formal study of military social work, Wurzweiler also offers assistance to veterans through Care Cafe, its community outreach program. Hana Frankl, director of Care Cafe, describes the current work being done with Samaritan Manhattan to provide wellness programs that assist veterans in their transition to civilian life “as part of Care Cafe’s strength-based social emotional model, where we strive to empower our veterans with a sense of hopefulness just as they have provided protection and hopefulness to America’s citizens.”

One program they offer is yoga training to help the veterans practice meditation and centering the self. Lynda Sing, a Mindful Movement Facilitator who works with the Care Cafe program, notes that “yoga can be a great complementary mind-body practice to improve health, resiliency, connection, and post-traumatic growth.” She adds, “Our intention is to help the veterans build a self-care tool box they can use any time they need for their continued recovery.” Many of the veterans have told Sing and Frankl that the yoga classes have made them feel better in their bodies and more grounded, relaxed and calm, able to attain some inner peace.

Kevin Wilson, a student at Wurzweiler, joined the United States Marine Corps in 1990, which allowed him “to experience a world I would never have experienced outside of enlisting in the military.” Upon his discharge, he studied at St. John’s University and Fordham University before settling on a social work career. “It was on my military journey that I understood the importance of respect and the cost of service,” he noted. “However, it was on my academic journey that I discovered that though wars might be resolved before they are started through simple discourse, many lives are placed in harm’s way and broken into tatters because of ill-advised decisions made by those in leadership positions. As a social worker, I get to play a part in the story of some of those affected lives.  Social workers are of vital importance to society, the glue that holds the souls of broken families and communities together.”

Dr. Joan Beder, professor emerita at Wurzweiler, has authored Advances in Social Work Practice with the Military (2012) and Caring for the Military (2017) and so speaks with authority about what Wurzweiler and the University have done to support veterans. “Yes, we have created several courses and a Certificate in Military Social Work to educate social workers in how to address the multiplicity of concerns of our military and their families.” But more important than what has been done is why it has been done: “Their needs for care and psychosocial intervention should be paramount to all, especially those in the helping professions, because their service and their valor is to be applauded and respected. Because they have protected us, we must protect them.”

(Special thanks to Shulamith Berger, Curator of Special Collections, and Deena Schwimmer, Archivist, for their help.)