Choosing Good over Evil: RIETS Alumnus Cary Friedman on the Lessons We Can Learn from Batman

It’s important to acknowledge this straight from the beginning: I love Batman.

In fact, no one loves him more than I do. He and I have a history that goes back more than four decades. But, increasingly, I rarely recognize the character in the comics and movies they keep calling “Batman.”

That shouldn’t be too surprising if you know anything about Batman and his portrayal in various media over the last several decades or if you know anything about human nature and the culture in which we live—a culture whose values and mindset are reflected in and expressed through its pop culture. Instead, the Batman I know and love is the Batman who inspires me and stands for a whole lot of greatness.

Since the mid-1980s, there’s been a tug of war between two different groups of comic book creators, and it’s a struggle for the soul of the Batman character. Consider it a battle between the traditionalists and the reformers. Suspend your eye-rolling disbelief for a moment and follow me on this.

One of the writers of the new school of thought describes the character as follows:

“[Batman] was the externalization of a psychologically dysfunctional man who worked out his rage and abandonment issues by becoming scary, in the process avenging his parents and bringing criminals to justice.”

Now, that’s dark stuff. That’s definitely not the Batman I grew to love in my childhood. I don’t mean to suggest that the Batman I love is the campy hero of the 1960s TV show (although that was my first introduction to the character). In fact, there is a serious alternative to the “psychologically dysfunctional man” that writer described.

No, the Batman I love isn’t the dark, dysfunctional, broken, angry, principle-less character many comic book creators like to portray in these dark, dysfunctional, broken, angry, principles-less times in which we live. Their Batman vents “his rage and abandonment issues by becoming scary” and beating people up. Fortunately, his actions are socially acceptable because the people he beats up are criminals.

The Batman I love—and whose example I invoke in my teaching—is the hero who responded to and triumphed over an experience of unspeakable tragedy and loss in childhood by creating a life of meaning and heroism through his tireless, relentless efforts to spare others the pain and loss he had experienced firsthand. As the child of a Holocaust survivor, who spent her childhood years fighting for her survival and went on to create a family and life filled with meaning, compassion for others and dedication to justice, it is a model with which I am very familiar.

Not to make more of this than it deserves, but there’s a lesson here. The way you see Batman provides a lot of insight into how you see life, especially your understanding of the human soul and its capabilities to transcend and accomplish. In all things in life, our perception is determined by the smallness or largeness of our own soul. We see things not the way they are, but, rather, the way we are.

The more cynical writers claim that no one could experience that kind of trauma and not succumb to the rage, pain and loneliness. That tells you more about them than perhaps they would want you to know. It gives you insight into their understanding of the human soul and its limitations. This darkening of the character—the attribution to him of motives far less than heroic—reflects and, in turn, fuels the general darkening and increasing disillusionment that pervades and poisons our society. 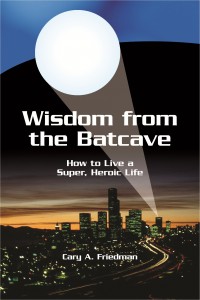 I might have even agreed with them, if not for the fact that I know my mom, as well as all those survivors who filled our house when I was a child. People who endured unspeakable tragedy and witnessed unparalleled wickedness, and responded by refusing to give up. People who triumphed over all that adversity and evil by building new lives and families, living lives of meaning and integrity, affirming the values of kindness and justice and compassion. They carried around a lot of sadness with them, make no mistake about that. But they never succumbed to the darkness (who could have blamed them if they had?) as they created lives of purpose and holiness.

As Torah Jews, we are familiar with this model. We’ve seen it too often in our people’s long history. The world has been remarkably creative in dreaming up new ways to oppress, torture, vilify and kill us, and we repay good for bad, we contribute to every society in which we live and we create a culture that affirms life. We have been a blessing to humankind, the same humankind that has been hell-bent on destroying us. We’ve never succumbed to the darkness or given in to our “rage and abandonment issues.” The Torah literature teaches us all kinds of lessons about transforming tragedy into accomplishment, and our holy Sages who were giants of the human spirit help us to understand and internalize these truths on the deepest of levels.

It wouldn’t be much of a stretch to propose that Batman could serve as a mashal [parable] of the Jewish people, and I’ve seen some writers suggest that. He was certainly the vehicle with which I, as a Holocaust survivor’s child with my own vicarious traumatic ‘hand me downs,’ processed my mother’s experiences.

The Batman comic books I read as a child provided me with the framework within which I could wrestle with notions like understanding G-d’s Providence, dealing with adversity, building a life of meaning, and my deep-seated desire and need to be heroic. As I grew older, I encountered these truths again in my Torah studies—they were much deeper and subtler and holier—but my first exposure to these philosophical truths came from Batman.

Thank G-d, the greatest of the Batman writers—the ones I revere, people like Dennis O’Neil, Steve Englehart and Chuck Dixon—see Batman as I do. Or, rather, I see the Batman the way they do, the way Batman’s creators, Bob Kane and Bill Finger, did.

In Torah learning, it’s always important to identify the nafka mina—the practical differences that exist—between two competing halachic [Jewish law] or hashkafic [philosophical] opinions. We can ask the same question here: What is the nafka mina between these two competing conceptions of Batman? I can identify a big one. Their Batman isn’t all that different from the bad guys he fights. Fortunately, he fights on the side of law and order—at some point in time he made the decision to vent his fury on this side of that line—whereas his foes, also brutal and fury-filled, operate on the other side. But there isn’t much difference. His “war on crime” is little more than a convenient excuse for this “psychologically dysfunctional” man’s scary “externalization” of “his rage and abandonment issues.” Luckily and conveniently, it happened to result in his avenging his parents and bringing criminals to justice.

Watching this ersatz Batman’s battles with the foes he fights, you almost have the feeling that you’re watching a battle between two opposing athletes or sports teams. Sports competitions aren’t generally categorized or perceived as battles between good and evil; they’re neutral contests of skill between rival teams or participants. At the forefront of this ‘dark’ Batman’s battles is the glorification of the violence itself; relegated way to the background, such that the lesson is obscured or lost, is the notion of a battle between good and evil—that notion is almost laughable, it’s so naïve sounding. Gadgets and fighting prowess take center stage, and principle and integrity get lost in the shuffle.

In this climate, when that’s the image of heroism [read: non-heroism] we’re offered, it’s not that surprising to watch a young man walk into a theater with all his gadgets and glory in the violence. After all, he’s probably just venting his rage issues, as well. The news commentators ask the question, “Who’s he imitating?” The symbolism of his dress, gadgetry and methodology is confusing—there are elements of both the movie version of “Batman” and his foes in this kind of behavior.

If everyone is venting their rage, there really isn’t all that much difference.

The Batman I know, the Batman who has appeared in my Torah teaching for the last 20 years, the Batman who inspired me to enter the rabbinate, the Batman who challenged me to exceed my own limitations in the pursuit of every goal I’ve ever had, the Batman of Bob Kane and Bill Finger, the Batman who inspires millions of people around the world—he isn’t the broken, dysfunctional man of those dark cynics of the human condition. The Batman I know is profoundly sad, having experienced loss so early in life. But somewhere along the line, early in his youth, he made a decision—a decision born of a powerful soul and great strength of character—that he would respond to the lousy hand he’d been dealt by becoming something bigger than the sum of his pain and rage, that his suffering would have meaning to the countless people who would never know suffering because of him, that he would memorialize his parents by continuing their legacy of public service and philanthropy, that he would champion justice for all those who are too weak to uphold it themselves, as he had once been weak.

That Batman, whether in costume or in his guise as Bruce Wayne, would feel very comfortable sitting around my parents’ Thanksgiving or Yom Tov table, listening to all the Holocaust survivors share their stories of incomparable heartbreak and incredible successes. He’d recognize their strength of spirit, their resilience, their active choice to embrace life and its complexities, challenges and responsibilities.

Our society could stand to hear more about that Batman.

Rabbi Cary Friedman ’95R is the author of five books, including Wisdom from the Batcave: How to Live a Super Heroic Life (Compass Books, 2006). He is the associate editor of the OU Press and a consultant to the law enforcement community on matters of police stress. Friedman formerly served as executive director of the Duke University Jewish Learning Experience in Durham, NC and as a chaplain at the federal prison in Butner, NC (where he studied Torah with Jonathan Pollard weekly for 4 years). A former congregational rabbi and instructor of Tanach at the Yeshiva University High School for Boys, Friedman is a popular scholar in residence and can be reached at ravcary@aol.com. The opinions expressed above are solely those of the author and should not be attributed to Yeshiva University.