On October 9, Yeshiva University’s Sy Syms School of Business hosted its second event in its annual “Leading with Meaning” initiative, which seeks to provide business ethics and entrepreneurial education programming to students and alumni. Called “The Silicon Valley of the Middle East: Understanding Israeli Entrepreneurial Success,” the evening featured presentations from two YU alumni who made the move to Israel—and made it big—that offered advice from their own professional and personal journeys about how to get involved in Israel’s business landscape.

“Our connection to Israel is usually spiritual or political, but there’s another side to Israel, a side that is making the greatest investors in the world get on a plane and invest billions in this country,” said Charlie Harary, clinical professor of management and entrepreneurship at Sy Syms and director of the Leading with Meaning initiative. “There are people in Israel making a difference by changing the economics of the country and the world, and those people are our people.”

Michael Eisenberg, a partner at the $140 million early stage venture capital fund Aleph, traced his passion for venture capitalism in Israel to a conversation with Rabbi Yehuda Amital, rosh yeshiva of Yeshivat Har Etzion, in the early 1990s, when Eisenberg was a student there. “I asked him whether it was a greater mitzva to settle in a particular area of Israel,” he said. “Rav Amital replied, ‘Set up a company that will employ 10,000 people and enable them to make a decent living—that is the greatest way to fulfill the mitzva of settling the Land.’ ”

With that as his goal, Eisenberg moved to Israel with his wife shortly after graduating from Yeshiva College in 1993 with a degree in political science. He recounted his career from a first job at a consulting firm working on the Oslo Peace Accords to Benchmark, an American venture capital firm responsible for the early stage funding of several successful startups. He also shared his guiding strategy, paraphrased from an adage by hockey player Wayne Gretzky: “A good player skates where the puck is. A great player skates where the puck is going to be.”

Where that is, Eisenberg believes, is Israel. “The internet is deflationary and accelerating the globalization of the workforce, which means you have declining workforces in every corporate company in America today,” he said. “Places people used to think of as career homes aren’t like that anymore. If you want to skate to where the puck is going, it’s not corporate America, it’s individualized entrepreneurship, and that’s exactly what Israel is so good at right now.” 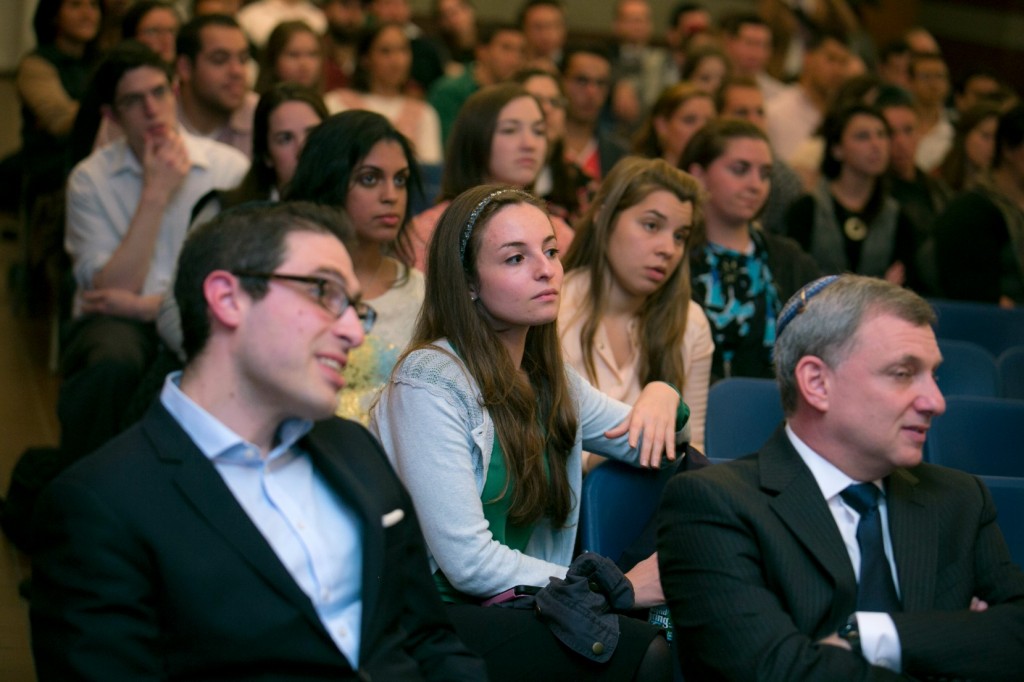 Jeremy Lustman, a partner at DLA Piper’s Corporate and Securities Group and fellow Yeshiva College graduate, agreed. “When I moved to Israel in 2009, you couldn’t have been in the midst of a worst economic downturn,” he said. “Being involved in the corporate world then was a recipe for disaster. The resilience of the Israeli economy was actually a key point in my elevator pitch to my company to allow me to go to Israel for a year and try to create a business there.”

Lustman’s presentation, “Reflections on Israeli Entrepreneurial Dynamics,” highlighted the growing number and size of mergers and acquisitions in Israel, as well as the ways Israeli technology is being used throughout the world on a daily basis. His talk also focused on ways YU students and alumni could get involved in Israeli business while still in New York, as well as the more subtle avenues entrepreneurship can take in careers that don’t necessarily lend themselves to it, such as law.

The program, which was co-sponsored by the Sy Syms Student Council and YU’s Israel Business Club, also featured a presentation by Alon Harris, an innovation facilitator and key accounts manager at Systematic Inventive Thinking, a Tel Aviv-based company founded by Yeshiva College graduate Yoni Stern. Afterward, all three presenters took questions from the audience on a wide range of topics, spanning everything from whether to enlist in the army after immigrating to Israel to how to deal with halachic [Jewish legal] issues that arise in a start-up.

The evening was Sy Syms senior Tova Kay’s second Leading with Meaning Event. “I came again this year because it’s so inspiring to hear about all the amazing things happening in Israel,” she said. For Kaye, who is majoring in management at Sy Syms with a concentration in human resources, Eisenberg’s experience was especially thought-provoking. “He had a goal and a passion and just kept working one job after another until he was on the right track to achieve it, which is great advice for college students.”

Josh Berliner ’01YUHS enjoyed the opportunity to connect with more than 200 fellow students and alumni interested in Israeli business. “I work for the Israel Trade Mission and when I saw this event on Twitter I had to come,” he said. “We’re matchmakers between the U.S. and Israeli business communities, so I’m always on the lookout for new potential business partnerships. I’m looking to meet students, alumni and faculty who are interested in promoting Israeli-American business by working with us.”

“In many ways this program encapsulates my aspirations and the aspirations of my colleagues, Associate Deans Michael Strauss and Avi Giloni, for the rejuvenated Sy Syms School of Business,” said Dr. Moses Pava, dean of Sy Syms.