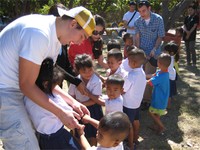 Feb 27, 2008 — When David Sugarman signed up for the Center for the Jewish Future’s humanitarian winter mission to Thailand with the American Jewish World Service (AJWS), he thought it would be an exciting opportunity to immerse himself in a foreign culture while helping the poor. But for the Yeshiva College freshman, who has a strong interest in social activism, volunteering in the impoverished village of Bon Kamklang in southeast Asia wound up being more than that—“it was an immersion in ideas,” he said.

“Whether discussing our roles as Jews in world affairs, or witnessing firsthand the terrible poverty that over a sixth of the world lives in, the trip challenged many of my assumptions and strengthened many of my convictions,” Sugarman, a resident of Riverdale, NY, said. He was one of 16 YU undergraduates, seven men and nine women, who spent a week in Thailand in January.

Each day, the group gathered to learn about world poverty and the Jewish values of tzedaka [charity] and tikkun olam [repairing the world] under the guidance of the AJWS staff. Using Judaic texts and secular literature, the students grappled with the complex responsibilities of addressing global injustice and with issues such as micro-financing and the World Bank.

“I learned so much from the AJWS staff—they were passionate about the issues and had a lot of education and experience to share,” Sugarman said.

Living among the villagers awakened the students to a world of poverty they knew little about. Camped out in an old schoolhouse made of branches, they helped construct the foundation of a new four-room school for the local children. They slept on thin mattresses surrounded by protective mosquito nets, used bucket showers and toilets, and ate a diet of white rice, fresh vegetables, and Pad Thai, a popular Thai dish made with stir-fried rice noodles.

On Shabbat afternoon, they visited the villagers in their homes to discuss many of the pressing issues that affect their lives, such as financial hardships and health care difficulties. The experience made a strong impression. “They lived in elevated huts made out of wood with metal roofs. There were cracks in the floor, torn mosquito nets, no luxury possessions,” Sugarman explained. “What little possessions they had, we learned, were all financed with loans they would never be able to pay back.”

Witnessing the community’s poverty, the YU contingent consulted with local leaders and came up with the idea of setting up a loan fund for the teachers to buy basics such as mosquito nets, shoes, and food. They collected about 6,000 baht ($200) among themselves and the teachers came up with a system of fair distribution.

“We thought that by helping them get out of the red, we’d be giving them a great opportunity,” said Yoni Frankel, Presidential Fellow at the CJF, who organized and accompanied the students on the trip. “This will enable them to sustain themselves and their community. And it will grow at a rate of two percent every year,” Frankel said.

During the week, the students also spent a morning teaching the local children the English alphabet and numbers, and introducing them to classic American games such as Duck, Duck, Goose. They visited a drop-in center run by the Pattanarak Foundation, a Thai NGO focusing on community development, near the Thai/Laos border and participated in an HIV awareness parade.

Throughout the trip, the students observed their Jewish traditions under the guidance of Ari Schwarzberg, a semikhah student at Rabbi Isaac Elchanan Theological Seminary, and his wife, Naomi. But the trip also presented a new lense through which to experience their Judaism. “Singing ‘Lecha Dodi’ in the school that we helped build for the children we had spent a week getting to know, was a remarkable religious and life experience,” said Sugarman.

The rewards of their immersion in a foreign culture were tangible. “The villagers said our participation saved them time and money, and without it the completion of the school would have been severely delayed,” Schwarzberg said.

On their return, the students felt that in one sense, their journey was only just beginning. Sugarman said: “I believe that now is when the real purpose of this mission presents itself as we begin to ask ourselves what we can do to fix the world.”