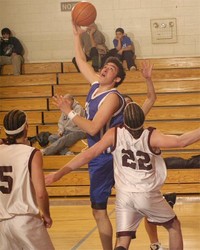 Cleveland was able to compete in the top tier this year as the 14th seed, but drew a very difficult draw in Hyman Brand. The Rams jumped out to a 13-0 lead and never looked back.

Of note in this game was the high level of competition that was sustained even late in this blowout game. Both teams continued to battle even as Hyman Brand led by more than 30 points with under two minutes to play.

Cleveland will travel to TABC tomorrow for a Tier II qualifying game. That game will not be broadcast by MacsLive. Hyman Brand will play sometime between 9:30 AM and 2 PM at the Max Stern Athletic Center.