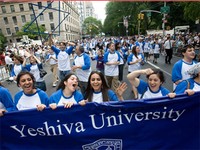 Jun 2, 2008 — Hundreds of Yeshiva University students, alumni, faculty, administrators, and friends marched up Fifth Avenue cheering and greeting the crowds as they celebrated Israel’s 60th anniversary of statehood in the annual Salute to Israel Parade.

View a photo gallery of YU at the Salute to Israel Parade.

President Joel led the YU contingent that accompanied the parade float with live music performed by the popular and lively band, Omek Hadavar. Students on the float handed out YU tee shirts to parade onlookers.

Students included representatives from the University’s undergraduate schools, affiliated high schools, and a large continent from YU’s Albert Einstein College of Medicine and their families. Many roshei yeshiva also marched with their students.